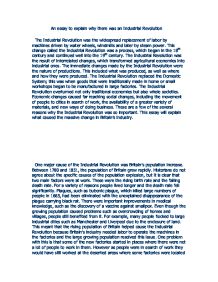 Explain why there was an Industrial Revolution

This meant that transporting goods and raw materials for the industry was made easier and quicker. However not all landowners were as open-mind and so tried to stop industry developing in their area. As farmers and landowners earned more money, it meant that they could reward themselves by spending more money on the goods made by the Industry. However, some historians do not agree with this point because many of the improvements made in Britain's agriculture happened long after the changes in Britain's industry had started. I personally think that the Industrial Revolution was a combination of causes and not just one; this means that one cause on its own is irrelevant whether it is justified or unjustified. Another contribution or cause of the Industrial Revolution was Britain's empire and overseas trade growing. From 1763, Britain's Empire grew even larger. Britain's Empire now had over twelve key locations; the empire was so large that the British government had to use the army and navy to take over land to prevent other countries like France and Germany taking it over. This happened in Africa and New Zealand. Canada, Egypt, Nigeria, India, and Hong Kong were also parts of the Empire. The large empire brought trading benefits to Britain. The colonies provided cheap supplies of raw materials like cotton, jute, and later rubber, palm oil and nitrates. Wealthier Britons also enjoyed exotic colonial products such as chocolate, silk, gold, and tea from India. These raw materials were used for several things. For example cotton from America; cotton was used in the textiles industry to produce cloth. ...read more.

The machine enabled farmers to sow seeds in straight rows, rather than the old system of throwing seeds over the ground by hand, which was very wasteful. After 1750, Britain had the world's first Industrial Revolution. By 1900 it was still the most powerful industrial and trading nation; though others were catching up fast. Steam powered machinery had increased and output and working conditions had changed. The population rose from 7million to 37million. The extra people provided the demand and the workers for industry and had created huge industrial cities like Manchester. They had thousands of factories and millions of crowded terraces. Gradually, they got water supplies, sewerage, schools and also new churches. Farmers had found ways of producing enough food to feed the cities using fewer workers. Horsepower had been joined by steam power and petrol. To conclude, I think the two most important causes of the Industrial Revolution were Britain's population growth and the new ideas and inventions in industry. The reason for this is because if it weren't for Britain's population increases the development of the industries would not have been so important. Another reason why I think Britain's population increase was one of the major causes of the Industrial Revolution, this is because Britain's industry would not improved so well if Britain's population did not assist. This is due to the fact that Britain's population provided cheap labor to work in the factories made for Britain's industry. The reason why the inventions made in Britain helped so much in causing the Industrial Revolution was because the new inventions ensured that modernization in machines could speed up the production in goods; which was very important. This essay has explained why there was an Industrial revolution ...read more.