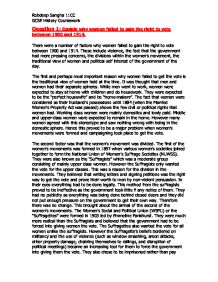 Question 1: Explain why women failed to gain the right to vote between 1900 and 1914. There were a number of factors why women failed to gain the right to vote between 1900 and 1914. These include violence, the fact that the government had more pressing concerns, the divisions within the women's movement, the traditional view of women and political self interest of the government of the day. The first and perhaps most important reason why women failed to get the vote is the traditional view of women held at the time. It was thought that men and women had their separate spheres. While men went to work, women were expected to stay at home with children and do housework. They were expected to be the "perfect housewife" and be "home-makers". The fact that women were considered as their husband's possessions until 1884 (when the Married Women's Property Act was passed) shows the few civil or political rights that women had. Working class women were mainly domestics and lowly paid. Middle and upper-class women were expected to remain in the home. However many women agreed with this stereotype and saw nothing wrong with being in the domestic sphere. ...read more.

Therefore a large number of important factors were in play during this turbulent period which explains why women failed to get the vote by 1914. In short, there was no single major event which demanded this great political shift. Question 2: Attitudes towards women and their right to vote had changed by 1918. How important was the First World War in bringing about this change? Women did not receive the vote solely because of the First World War but it did play a major part in women gaining the vote and attitudes towards women changing. The War was a major factor in shaping the change in attitudes to women's suffrage, but there were other political changes in Parliament which had a very considerable impact. The response of the women's movement and their support for the war effort was a key factor in women gaining the vote. When the First World War was declared the WSPU (Suffragettes) decided to put their campaigning on hold in order to help the War effort. Emmeline Pankhurst believed that "there was no point in continuing to fight for the vote when there might be no country to vote in." ...read more.

Women in New Zealand, Australia, Finland, Denmark and Norway already had the vote, and Canada and four American States granted the vote for women in 1917. It is too easy to say that women's contribution towards the war effort earned them the vote. In fact, the ones who made the most obvious effort (the young munitions workers in the factories, working in dangerous conditions, but under 30) weren't actually allowed to vote. The vote was mainly given to older women who would promote stability in society. The campaign of the Suffragettes and Suffragists before the war laid down the foundation for granting the vote. No doubt any government which failed to grant some suffrage would fear that militancy would start again after the war. Also it would be very difficult for any government to start imprisoning women who had so publicly been praised for their war effort. Some historians argue that the war may have actually delayed women getting the vote, as conciliatory gestures were being made to the women's movement before the outbreak of war. But all these things taken together show that attitudes had changed and such a horrific event as the Great War clearly had great importance to that change. ?? ?? ?? ?? Robdeep Sangha 11CC GCSE History Coursework ...read more.