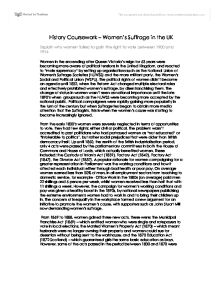 History Coursework - Women's Suffrage in the UK Explain why women failed to gain the right to vote between 1900 and 1914 Women in the era ending after Queen Victoria's reign for 63 years were becoming more aware of political tensions in the United Kingdom, and reacted to "male supremacy" by setting up organisations such as the National Union of Women's Suffrage Societies (NUWSS) and the more militant party, the Women's Social and Political Union (WSPU). The political rights of women didn't become an agenda until 1832, when the Reform Act changed multiple electoral roles and effectively prohibited women's suffrage, by disenfranchising them. The change of status in women wasn't seen as national importance until the late 1890's when groups such as the NUWSS were becoming more accepted by the national public. Political campaigners were rapidly gaining more popularity in the turn of the century but when Suffragettes began to obtain more media attention that the Suffragists, this is when the women's cause was starting to become increasingly ignored. From the early 1800's women were severely neglected in terms of opportunities to vote, they had few rights; either civil or political. The problem wasn't accredited to past politicians who had portrayed women as "not educated" or "intolerable to politics", but rather social prejudices that were older than British democracy itself. Up until 1860, the zenith of the British industrialisation period, only 4 acts were passed by the parliamentary committees in both the House of Commons and House of Lords, which actually benefited women. ...read more.

this was probably due down to the fact that most of the members of the group were working class, and could not afford to vacate work placements at shift times. Even though the number of pro-suffrage MPs in the House of Commons grew, the Suffragists got nowhere in their campaign. This was a consequence of the nature of the operation that was being used; the suffragists were losing necessary support from the Liberals at the turn of the century, and they were losing media interest in their campaign because of the lack of any "action", but the largest flaw was the fact that they concentrated on multiple issues, not only women's suffrage, so supporters and the public believed they were not as committed to the idea as other groups. So in 1903, a group of ex-NUWSS members (the Pankhurst family) created a new, more militant, society to hopefully obtain the vote. This group was known as the WSPU and was created with different methods in mind, as the motto- "Deeds not Words" - showed. They became to be known as "Suffragettes" by a term coined in the Daily Mail in 1906. The first action taken by the WSPU was by interrupting a Liberal conference in Manchester at the Free Trade Hall in 1905; both Annie Kenney and Christabel Pankhurst were arrested, this shocked the public and drew publicity. ...read more.

was not enough to challenge the Asquith government. Plus, James Keir Hardie and Labour wanted to get the vote for women but believed that all the working-class should get it first, but this was almost impossible as this would have included already prohibited members of society. And so because of the mixed opinion, a stalemate developed. Additionally, there were still some marks on women in traditional culture. They were seen as 'intellectually inept' and giving them vote would give them 'influence in other areas of society'. Men, and some women, generally believed that a woman's role in life was to be housebound and be 'enforcers of moral standards', and their role in politics would make them 'less feminine'. But these arguments may be understandable as women made 51% of the population, and therefore a majority if a general election was available to women. This opposition, however, was before 1900. After that date, the ultimate reason why women did not get the vote was because of the actions the campaigners took. The prison sentences from 1900 to 1914, gave negative publicity to the promoters of the cause and they lost a great deal of suffragist and suffragette members. After 1911, the action became more violent and aggression became an official policy of the WSPU. The support for the movement became disturbed by the actions and the opportunities that the suffragists had created, the suffragettes destroyed. The suffragettes had attempted to and succeeded in raising the PR of the progress, but in due course they ultimately damaged their own movement. ...read more.