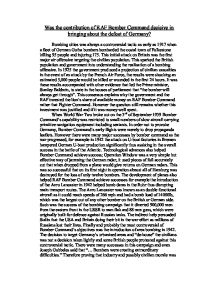 Was the contribution of RAF Bomber Command decisive in bringing about the defeat of Germany? Bombing cities was always a controversial tactic as early as 1917 when a fleet of German Gotha bombers bombarded the costal town of Folkestone killing 95 people and injuring 175. This initial attack on Britain was the first major air offensive targeting the civilian population. This sparked the British population and government into understanding the realisation of a bombing offensive. In 1925 the government produced a projection of civilian casualties in the event of an attack by the French Air Force, the results were shocking an estimated 5,000 people would be killed or wounded in the first 24 hours. It was these results accompanied with other evidence that led the Prime minister, Stanley Baldwin, to state in the houses of parliament that "the bomber will always get through". This consensus explains why the government and the RAF invested the lion's share of available money on RAF Bomber Command rather that Fighter Command. However the question still remains whether this investment was justified and if it was money well spent. ...read more.

The main reason that area bombing was introduced was to affect the morale of the civilians so that German citizens would not support the war thus causing strikes and affecting the German economy. Striking action by industrial workers (caused by the Royal Navy blockade) in Germany was one of the major reasons why Germany surrendered in World War One, however, no such action happened in World War Two and in fact the bombing of German cities seemed to bring German people together and strengthen their resolve again Britain. Even Fredrick Lindermann one of William Churchill's scientific advisors said in a report "that such a policy (of bombing) can only have a decisive effect if carried out on a much bigger scale." All of this bombing with little reward cost 55,573 servicemen's lives from a total of 125,000 aircrew (a 44.4% mortality rate), a further 8,403 were wounded in action and 9,838 became prisoners of war. A Bomber Command crewmember had a worse chance of survival than an infantry officer in World War I. The main reason for such high casualties was because of effective German defence methods such as; search lights, flack guns effective radars (Freya and Wurzburg radars), blackouts, dummy factories and dummy cities. ...read more.

Bomber Command took many photos of the bombs that they had dropped in order the assess the damage that they had created, however from photos it is hard to gauge damage to equipment inside factories, even if the factory looks flattened the equipment inside may still be operable. Another major problem is Bomber Command's statistics, as Winston Churchill did not allow a survey to assess damage and casualties, as he did not want to rake over these controversial issues in order to try and maintain popularity. Furthermore evidence may have been changed by generals on both sides to maximise the effectiveness of there own area of war. To conclude RAF Bomber Command was a major help in the Allied war effort, but not decisive in bringing about the defeat of Germany. I believe this because I feel there were more important factors that led to the defeat of Germany, such as the Battle of the Atlantic that introduced the USA into the war. Moreover, area bombing did not have the desired effect that Sir Arthur Harris envisaged as German wartime production increased year on year until the third quarter of 1944, and German citizens seems to be brought closer together in the aftermath of a bombing raid, thus suggesting that the main objectives of Bomber Command failed. ...read more.