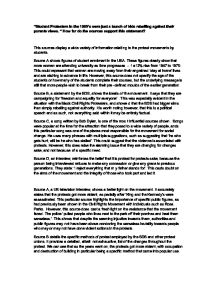 Student Protesters in the 1960s were just a bunch of kids rebelling against their parents views. How far do the sources support this statement?

"Student Protesters in the 1960's were just a bunch of kids rebelling against their parents views. " How far do the sources support this statement? This sources display a wide variety of information relating to the protest movements by students. Source A shows figures of student enrolment in the USA. These figures clearly show that more women are attending university as time progresses - 1 a12% rise from 1947 to 1970. This could represent that women are moving away from their engrained 'stay at home' lives and are wishing to advance in life. However, this source does not specify the age of the students or how many of the students complete their courses, but the underlying message is still that more people wish to break from their pre-defined moulds of the earlier generation. ...read more.

However, this does raise the alarming issue that they are changing for changes sake, and not because of a specific need. Source D, an interview, reinforces the belief that it is protest for protests sake, because the person being interviewed refuses to make any concession or give any grace to previous generations. They state: 'I reject everything that my father stands for'. This casts doubt on the aims of the movement and the integrity of those who took part and led it. Source A, a US television interview, shows a better light on the movement. It accurately states that the protests got more violent, especially after 'King and the Kennedy's were assassinated. This particular source highlights the importance of specific public figures, as had previously been shown in the Civil Rights Movement with individuals such as Rosa Parks. ...read more.

The benefit of doing such things other than to draw attention to the union in a negative light is unclear, although it should be noted that not all of the protesters chose to take part in such direct activities. This is shown in Source C, from America Divided: the Civil War of the 1960's , where people like Tom Hayden encourages people to protest with 'Viet Cong' placards or flags proclaiming their disdain for the war. However, Source C also shows the continuing trend that by the mid 1960s, violence had spiralled out of hand and protesters called for people to 'Stand in front of a troop train'. In conclusion, it could be seen that the aim of the Student Protests in the 1960s was well laid out and organized to focus on anti-war or pro-love tactics, but as the years progressed it quickly became a reality where violence was common and protests meant little except loss of life. ?? ?? ?? ?? ...read more.

The author demonstrates strong comprehension of the source material throughout but the response is weakened because the specific question has not been addressed. The response could be further strengthened by cross -referencing source material and extending the points on provenance. 3 out of 5 stars.