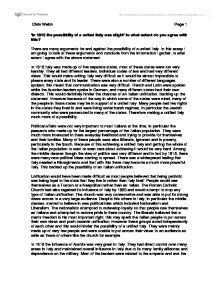 In 1815 the possibility of a united Italy was slight(TM) to what extent do you agree with this?

'In 1815 the possibility of a united Italy was slight' to what extent do you agree with this? There are many arguments for and against the possibility of a united Italy. In this essay I am going to look at these arguments and conclude from the information I gather, to what extent I agree with the above statement. In 1815 Italy was made up of five separate states, most of these states were run very harshly. They all had different leaders, individual codes of law and had very different views. This would make uniting Italy very difficult as it would be almost impossible to please every state and its leader. There were also a number of different languages spoken; this meant that communication was very difficult. French and Latin were spoken while the Austrian leaders spoke in German, and many different states had their own dialects. ...read more.

Among the middle classes though the view of politics was very different and in fact by 1815, there were many new political ideas starting to spread. There was a widespread feeling that Italy needed a Risorgimento and that with this there may become a much more powerful Italy. This backed up the possibility of an Italian unification. Unification would have been made difficult as most people believed that being patriotic was being loyal to the state that they live in rather than Italy itself. People would see themselves as a Tuscan or a Neapolitan rather than an Italian. The Roman Catholic Church had also regained its influence of Italy by 1850 and would attempt to stop any type of Italian unification. The church was very conservative and was able to put its strong views across to a very large audience. Despite this others in Italy, in particular the middle classes, started to believe in new political ides which included Nationalism and Liberalism. ...read more.

At the time there was also something called the holy alliance which was made up of Austria, Russia and Prussia. They were uninterested in the problems faced by people because of there rulers and disliked anything that even hinted to a revolution. Even the more sympathetic countries such as Britain and France were in no position to help. From the information I have gathered I conclude that I agree with the statement to a certain extent but not entirely. There are many reasons that the chance of a United Italy are slight and these reasons generally outweigh the arguments that its not. Most of the arguments against the statement also only hinder the arguments for it rather than exclude them completely. However even with this I fell that the way in which many of the states were run, soon enough the people would look to push for a United Italy as it would definitely be in their own personal interests. ?? ?? ?? ?? Chris Webb Page 1 ...read more.