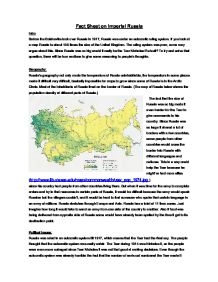 Fact Sheet on imperial Russia Intro Before the Bolsheviks took over Russia in 1917, Russia was under an autocratic ruling system. If you look at a map Russia is about 100 times the size of the United Kingdom. The ruling system was poor, some may argue about this. Since Russia was so big would it really be the Tsar Nicholas II's fault? To try and solve that question, there will be four sections to give some reasoning to people's thoughts. Geography: Russia's geography not only made the temperature of Russia uninhabitable, the temperature in some places made it difficult very difficult, basically impossible for crops to grow since some of Russia is in the Arctic Circle. Most of the inhabitants of Russia lived on the border of Russia. (The map of Russia below shows the population density of different parts of Russia.) The fact that the size of Russia was so big made it even harder for the Tsar to give commands to his country. Since Russia was so large it shared a lot of borders with a few countries, some people from other countries would cross the border into Russia with different languages and cultures. This in a way could help the Tsar because he might've had more allies (http://www.lib.utexas.edu/maps/commonwealth/ussr_pop_1974.jpg) since his country had people from other countries living there. But when it was time for the army to complete orders and try to find resources in certain parts of Russia, it would be difficult because ...read more.

Others thought that the only reason Tsar Nicholas II wanted to go to war was to distract the people from the obvious problem of food shortage, poverty, inequality, poor working conditions etc. but world war I only caused more poverty and food shortages, not to mention the large amount of military casualties. Not only was Tsar Nicholas II indecisive but he also inherited a lot of his fathers problems when he became Tsar. Social Issues: Russia in 1914 definitely had a large difference in social classes. The Photo below shows us an example of a social class pyramid. As you can see the Tsar is on the top by himself and the peasants are on the bottom. In between there is the nobles after the Tsar, then the church, military and merchants. The pyramid shows how the population and power worked, the pyramid sort of works like the less of one kind of social status the more power. For example there are a lot of serfs, so they have less power. There is only one Tsar so he has a lot of power. Eventually people realized that that was all unfair and that the serfs could actually overthrow the Tsar. The Tsar had absolute ruling of Russia, technically everything that happened in Russia was under the Tsars responsibility. Tsar Nicholas II was interested in bringing the mediaeval idea of the Tsar and his people. ...read more.

There were demonstrations of people wanting food but were very badly dealt with by the authorities. That triggered the 1905 revolution. Just as people thought things couldn't get worse in 1906 Russia had a great problem with harvest, their crops were falling from 12.8 million metric tons in 1905 to 9.9 million in 1906, oats from 12.0 million to 8.8 million, potatoes from 27.6 million to 25.1 million. Later the peasants pay increased by 100% which would normally be a very good thing, except for the fact that the costs of food and living supplies sky rocketed to 300% more than before. Most people in the agricultural business were leaving to go to the cities in search for better jobs, but they weren't enough jobs to give to everyone, and if they weren't filled, well, they weren't offering a very good pay. In Russia the main industries were agricultural and the heavy industries such as metal industries. Russia was in debt, the agriculture was growing badly, and the amount of Jobs wasn't enough for the growing population. Conclusion: Times like this you wonder, what did Tsar Nicholas II do to help Russia? Well, the things mentioned just now aren't entirely Tsar Nicholas II fault, so you couldn't really blame him for having inherited a country that was very large, or already in debt, but we can blame him for making matters a little worse than they already were. And being a tad bit full of himself thinking that he could beat the Japanese with only his strategy. ...read more.