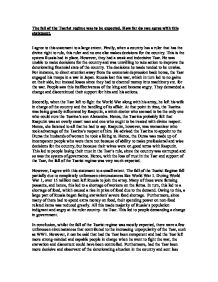 Fall of Tsarist Regime was to be Expected

The fall of the Tsarist regime was to be expected. How far do you agree with this statement.

I agree to this statement to a large extent. Firstly, when a country has a ruler that has the divine right to rule, this ruler and no one else makes decisions for the country. This is the system Russia had in place. However, they had a weak and indecisive Tsar. He was unable to make decisions for the country and was unwilling to take action to improve the deteriorating financial state of the country. The decisions he made tended to be unwise. For instance, to direct attention away from the economic depression back home, the Tsar engaged his troops in a war in Japan. Russia lost this war, which in turn led to no gains on their side, but instead losses since they had to channel money into machinery etc. for the war. People saw this ineffectiveness of the king and became angry. They demanded a change and discontinued their support for him and his actions.

Secondly, when the Tsar left to fight the World War along with his army, he left his wife in charge of the country and the handling of its affair. At that point in time, the Tsarina was being greatly influenced by Rasputin, a witch doctor who seemed to be the only one who could cure the Tsarina’s son Alexandra. Hence, the Tsarina probably felt that Rasputin was an overly smart man and one who ought to be treated with divine respect. Hence, she listened to all that he had to say. Rasputin, however, was womanizer who took advantage of the Tsarina’s respect of him. He advised the Tsarina to appoint to the Duma the husbands of women he took a liking to. Hence, the Duma was made up of incompetent people who were there not because of ability to make professional and wise decisions for the country, but because their wives were on good terms with Rasputin. This led to people losing their trust in the Tsar’s rule, since the country was corrupted and so was the system of governance. Hence, with the loss of trust in the Tsar and support of the Tsar, the fall of the Tsarist regime was very much expected.

However, I agree with this statement to a small extent. The fall of the Tsarist Regime fell partially due to completely unforeseen circumstances like World War 1. During World War 1, over 15 million men left Russia to join the army. Many of these were farming peasants, and hence, this led to a shortage of workers on the farms. In turn, this led to a shortage of food, which caused a rise in price of food due to the demand. Owing to this, a large part of Russia began facing starvation/ severe food shortage.  Furthermore, since many of them had to spend extra money on food, their spending power on non-food related items was reduced greatly. All this made majority of Russia’s population indignant and angry at the ruler country- the Tsar. This led to people demanding a change in government.

In conclusion, whilst the fall of the Tsarist regime was mostly expected, there were a few unforeseen circumstances that contributed to the increasing unpopularity of the Tsar, such as WW1. However, it can be said that had the Tsar been competent and had the Tsar left more strong-minded and capable people in charge when he went to fight the war, the starvation and discontent could have been controlled. Furthermore, had the Tsar been more decisive and observant of the deteriorating situation in the country and sent less troops into the war (considering that they were merely helping their allies in battle), the disastrous consequences mentioned above could very much have been reduced. Therefore, it was due to the known weaknesses of the Tsar that the government lost popularity with the people and hence caused the fall of the Tsarist regime to be nothing but expected. The unforeseen circumstances merely further proved the Tsars inabilities.