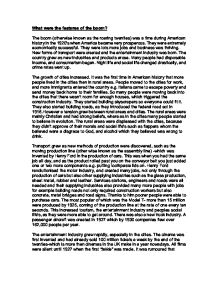 Features of the boom

What were the features of the boom? The boom (otherwise known as the roaring twenties) was a time during American history in the 1920's when America became very prosperous. They were extremely economically successful. They were lots more jobs and business was thriving. New forms of transport were created and the entertainment industry was born. The country grew as new industries and products arose. Many people had disposable income, and consumerism began. Night life and social life changed drastically, and crime rates went up. The growth of cities increased. It was the first time in American history that more people lived in the cities then in rural areas. People moved to the cities for work, and more immigrants entered the country e.g. Italians came to escape poverty and send money back home to their families. So many people were moving back into the cities that there wasn't room for enough houses, which triggered the construction industry. They started building skyscrapers so everyone could fit it. They also started building roads, as they introduced the federal road act in 1916.However a tension grew between rural areas and cities. ...read more.

turn,and the 1920's were nicknamed "the jazz age".As Blacks moved from the country to the cities, they brought Jazz and Blues with them. A popular dance at the time was the Charleston. Sports like boxing were also popular, and the heavy weight champion was Jack Dempsey. In baseball the New York Yankees and Boston red sox were popular. Al Capone (an extremely famous gangster) was a huge baseball. Peoples social life's changed drastically during the twenties, as their morals were questioned. The Anti-Saloon league for Women's Christian Temperance Union campaigned for prohibition(which originated in the nineteenth century)), until politicians won rural votes for upholding prohibition. In January 1920 the Volstead Act was passed, which banned alcohol in the U.S.A. However it was impossible to enforcing in Urban area, as speakeasies (illegal bars) were available. Bootleggers(suppliers of illegal alcohol) were becoming very rich. An FBI agent went under cover to find out how long it took to access illegal alcohol, and found that in New Orleans it took as little as 35 seconds. Prohibition lead to corruption, and organised gangs made $2 billion in illegal sales of alcohol. ...read more.