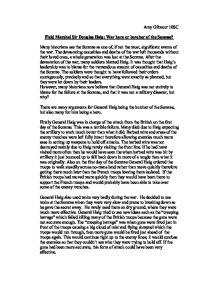 Amy Gilmour 10SC Field Marshal Sir Douglas Haig: War hero or butcher of the Somme? Many historians see the Somme as one of, if not the most, significant events of the war. The devastating casualties and deaths of the war left thousands without their loved ones, a whole generation was lost at the Somme. After the devastation of the war, many soldiers blamed Haig. It was thought that Haig's leadership was to blame for the tremendous amount of casualties and deaths of the Somme. The soldiers were thought to have followed their orders courageously, precisely and so that everything went exactly as planned, but they were let down by their leaders. However, many historians now believe that General Haig was not entirely to blame for the failure at the Somme, and that it was not a military disaster, but why? There are many arguments for General Haig being the butcher of the Somme, but also many for him being a hero. Firstly General Haig was in charge of the attack from the British on the first day of the Somme. ...read more.

He rarely used them on dry ground, where they were much more effective. General Haig tried to use new ideas such as the "creeping barrage" which failed killing many of the British troops because the guns were not accurate enough. The "creeping barrage" was when guns were fired just in front of the troops causing a big cloud of mist and flying shrapnel which the troops would run through, then more guns would be fired just ahead of the troops again. This would continue right up to the enemy lines; it would confuse the enemies so that they couldn't see who they were trying to hold off. If the guns had been more accurate, this form of attack could have been very effective. Haig was also considered a bad general due to him having had an advantage for years in numbers over the Germans. For the few months that the Germans had a numerical advantage over the British troops they almost won the war. This also leads many to believe that we would have lost the war if it were not for America joining in. ...read more.

Haig's problems with destroying the German trenches were not entirely his fault either. Artillery experts had in actual fact, guaranteed Haig that the enemy trenches would be destroyed at the Battle of the Somme. This left a lot of the blame to the experts that told him this, not many would have disagreed with experts in the field. With General Haig's plans of attack getting better all the time, he must have been doing something right. After all, the Battle of the Somme caused more casualties on the Germans than the British so his main aims of the battle, to kill and injure some of Germany's best troops, had been achieved. The reason for planning this attack at all was also achieved; Verdun was saved. In my opinion, General Haig was neither a butcher nor a hero; he tried to do his best by thorough planning. I personally think that others reasons were to blame for his plan failing. Artillery experts and the lack of technology meant that his well thought out plan did not go as expected. Though a whole generation was lost, this section was not planned and therefore not entirely his fault. Haig was not a hero, definitely not a butcher; he was just a good general. ...read more.