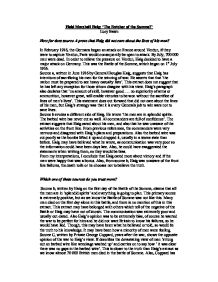 Field Marshall Haig: 'The Butcher of the Somme?'

Field Marshall Haig: 'The Butcher of the Somme?' Lucy Bawn How far does source A prove that Haig did not care about the lives of his men? In February 1916, the Germans began an attack on France around Verdun, if they were to capture Verdun, Paris would consequently be open to attack. By July, 700 000 men were dead. In order to relieve the pressure on Verdun, Haig decided to have a major attack on Germany. This was the Battle of the Somme, which began on 1st July 1916. Source a, written in June 1916 by General Douglas Haig, suggests that Haig has intentions of sacrificing his men for the winning of war. He asserts that that 'the nation must be prepared to see heavy casualty lists'. This extract does not suggest that he has left any exception for those whom disagree with his view. Haig's paragraph also declares that 'no amount of skill, however good . . . no superiority of arms or ammunition, however great, will enable victories to be won without the sacrifice of lives of men's lives'. This statement does out forward that did not care about the lives of his men, but Haig's strategy was that it is every Generals job to win wars not to save lives. Source b evokes a different side of Haig. He wrote 'the men are in splendid spirits. The barbed wire has never cut so well. Al commanders are full of confidence'. The extract suggests that Haig cared about his men, and also that he was unaware of the activities on the front line. From previous references, the commanders were very nervous and disagreed with Haig's plans and preparations. Also the barbed wire was cut poorly as the bombs lifted it up and dropped it, usually in a worse state than before. Haig may have believed what he wrote, as communication was very poor so the information could have been days late. ...read more.

It gave western powers confidence'. Source F is against what sources G and H propose. This source was from a recent book called 'British Butchers and Bunglers of World War'. Source F describes Haig to be 'as stubborn as a donkey'. His strategy was that 'if he could kill more Germans than Germany could kill British that he would at sometime would win the war'. This principal was described to be 'appalling' and 'slaughter'. The Somme was also described as 'criminal negligence'. The extract claims that he knew of the low succession rate and even so he sent the men to their deaths. As you can see, the sources G and H show a very different opinion of Haig compared to F. The sources G and H have a very positive view about Haig, explaining that the death of thousands of men were to show Haig's bravery, determination and shown the great belief he had in his plans. They also claim that many men were influenced by Haig, and believed in his plan despite they might have to lose their life. Source F suggests that Haig was an appalling and falling General. It suggests that Haigs actions were to blame for all the deaths caused in the Somme and that he was unthinking. It suggests that every had this opinion of Haig. The sources G and H do not prove that source F is incorrect as source F is from a recent book, of which the authors would have had a wider range of information that the two slightly older sources, G and H. As they have a very different view, it is hard to say for definite which is correct, though source G is an old source published in 1930's and source H will be bias as its written by a British General. Why do you think sources I and J differ about the Battle of the Somme? ...read more.

It denies any success of the Somme, and praises the Americans entering otherwise Britain would have lost stalemate. All of these show many different views to Haig's plans, the minority being negative towards him. In many of the sources he is blamed for the death of the men by either being uncaring enough not to attend the front line (source E), being so stubborn that he can not take criticism despite realising the deaths of all the men (source F) and that theses two sources clearly show that he is not fit to be a General with these characteristics. The fact that he does not attend the front line through his own fault, means that he is careless about the men; the least he could do is attend once. Other sources such as J, D, C and A also have a negative opinion of Haig and his plan. These blame him of the deaths for being uncaring and incompetent. Despite there being negative sources, there are also positive ones, such as Source H which claims that the Somme as successful as Haig created British moral as well as decreasing the German's spirits. Other source's suggest that Haig is caring, such as in Source B, by the way he writes about his men: 'troops are full of confidence'. The positive attitude is also shown in source I, written by Lloyd George, though he changes his opinion a few years after the war in source J. This may have been the case for all the positive sources if they were to have all the information available to us now or without a bias view. My overall conclusion is that Haig was uncaring about his men, as he shown on his attendance to the front line and acted stubbornly without giving any consideration to other opinions. Though I understand that the determination from Haig to win the war was great and this was seen to be successful by having high moral. I feel Haig cared about winning the war, and not about his men. ...read more.