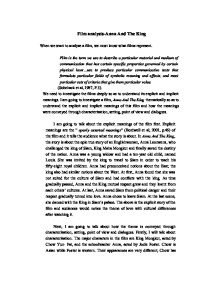 Film analysis- Anna And The King

Film analysis-Anna And The King When we want to analyze a film, we must know what films represent. Film is the term we use to describe a particular material and medium of communication that has certain specific properties governed by certain physical laws...use to produce particular communicative texts that formulate particular fields of symbolic meaning and effects, and meet particular sets of criteria that give them particular value. (Sobchack et al, 1987, P.3). We need to investigate the films deeply so as to understand its explicit and implicit meanings. I am going to investigate a film, Anna And The King thematically so as to understand the explicit and implicit meanings of this film and how the meanings were conveyed through characterization, setting, point of view and dialogues. I am going to talk about the explicit meanings of the film first. Explicit meanings are the " openly asserted meanings" (Bordwell et al, 2001, p.46) of the film and it tells the audience what the story is about. In Anna And The King, the story is about the epic true story of an Englishwoman, Anna Leonwens, who challenged the king of Siam, King Maha Mongkut and finally saved the destiny of the nation. Anna was a young widow and had a ten-year old child, named Louis. She was invited by the king to travel to Siam in order to teach his fifty-eight royal children. Anna had preconceived notions about the East; the king also had similar notions about the West. ...read more.

But in 17th century Siamese believed that one man could have many wives and all the wives should obey their husband no matter what he said. So, King Mongkut had 23 wives, 42 concubines and 58 children. When the King found out one of his concubines, Tuptim, loved another man, the court punished her with death penalty. In social aspects, Siam had slavery system and believed that slaves had lower status than their master. But the West believed that all human were equal, so Anna's servants had friendly relationships with her. In political aspects, in 17th century, Siam was a feudal society while most of the western countries were capitalist countries. The different point of views between East and West brought out the theme of the film and left many questions for the audiences to think about. Cook comments that " film is significant not because it was a picture with synchronized sound but because it was a talking picture" (cited in Valasek, 1992). Cook states the significance of dialogues in the film. Without the dialogues, film can not convey their main messages to the audiences. I am going to extract some dialogues from the film to show that how conversations convey the theme of cultural differences. Louis, Anna's child, asked Anna why the King needed her to teach his royal children if nobody in Siam spoke English. Anna replied ' because the way of England are the ways of the world. ...read more.

In reality, teachers may not have the powers to save and change the destiny of a nation, but the contribution of teachers are significant. They may change students from bad to good and change the destiny of students' lives. In personal life aspects, " some viewers approach a film expecting to learn lessons about life" (Bordwell et al, 2001, P.47). The film Anna And The King can teach the audiences something about life. At the end of the film, when Prince Chulalongkorn saw Anna and his father waltzing, he made such comment. It is always surprising how small a part of life is taken up by meaningful moments. Most of them, they are over before they start, although they cast a light on the future and make the person who originated them unforgettable (Anna And The King, 2000). From the points of view of the film, it is sending a message that we need to treasure our friends and family members; If we do not treasure them now, we will feel regret later. In conclusion, I have analyzed the explicit and implicit meanings of the film. The explicit meanings are the surface meaning of the film. It tells the audiences what the story is about. The implicit meanings are the deep meaning. I have analyzed the implicit meanings thematically in social, cultural and personal life aspects. I have also showed that how the theme was conveyed through characterization, setting, points of view and dialogues. After reading this piece of writing, the readers may have a better overview and deeper understanding on the film Anna And The King. ...read more.