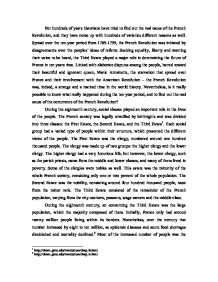 Find out the real cause of the French Revolution

For hundreds of years historians have tried to find out the real cause of the French Revolution, and they have come up with hundreds of varieties different reasons as well. Spread over the ten-year period from 1789-1799, the French Revolution was initiated by disagreements over the peoples' ideas of reform. Seeking equality, liberty and wanting their voice to be heard, the Third Estate played a major role in determining the future of France in ten years time. Linked with elaborate disputes among the people, hatred toward their beautiful and ignorant queen, Marie Antoinette, the starvation that spread over France and their involvement with the American Revolution - the French Revolution was, indeed, a strange and a marked time in the world history. Nevertheless, is it really possible to know what really happened during the ten-year period, and to find out the real cause of the occurrence of the French Revolution? During the eighteenth century, social classes played an important role in the lives of the people. The French society was legally stratified by birthrights and was divided into three classes: the First Estate, the Second Estate, and the Third Estate1. ...read more.

The Enlightenment ideas also influenced the philosophical thinking of the Third Estate. Widely circulated among the people, a vast majority of the bourgeoisie criticized absolute government and the unfairness of the society. Despite the strong efforts of the French monarchy and the Catholic Church to ban the works of Montesquieu, Voltaire and Rousseau, their influence soon spread throughout France, sparking interests of revolution everywhere.5 The Enlightenment beliefs also challenged the absolute rights to rule. The bourgeoisie began to become critical of the class system and started to believe that men should prosper through effort, opportunity and education, and not classed by birth. They also introduced ideas of equal rights and finally, the abolition of the Estate system. Inspired by such writers, soon a widely known document were drafted, known to this day as the Declaration of the Rights of Man. Food scarcity was also another possible cause for the Revolution to happen. In the eighteenth hundreds, common people were starving in the streets of France. Bread constituted the staple of most urban diets, so sharp price increases were felt quickly and were loudly protested at grain markets or at local bakers' shops.6 Different crop failures in the 1780s caused these shortages, which of course led to high prices for bread. ...read more.

Seeing the opportunity, as they were ruled by a weak king, this might be what had caused the idea of revolution to first spark in the minds of the common people. The situation during the French Revolution was unique in many ways. It was a time of which the old ways and new ideas intertwined, a time of splendid and rich arts, a time of gaining power and territory, and certainly a time of change. Equality, liberty, independence and freedom of speech all were the results of the French Revolution. This marked time in history certainly has a valuable teachings to all people: that all people could express what they wanted in their society and actually have it if they tried. There is no exact cause of where the idea of the French Revolution came from, because it is impossible to go back in time. In conclusion, the opinions stated throughout this essay are as seen from a perspective of what really happened and what might have caused it during that period of time, and is certainly not the exact truth of what had happened. 1 http://chnm.gmu.edu/revolution/chap1b.html 2 http://chnm.gmu.edu/revolution/chap1a.html 3 Travels in France, Arthur Young. 4 http://www.geocities.com/thefrenchrevolution/causes.html 5 http://chnm.gmu.edu/revolution/chap1c.html 6 http://chnm.gmu.edu/revolution/chap1b.html 7 http://www.angelfire.com/va/frenchrev/LouisXVI.html 8 http://www.wsu.edu:8000/~dee/REV/LOUISXVI.HTM ...read more.