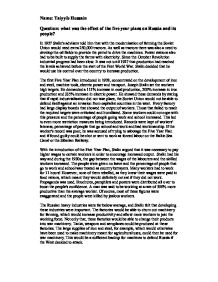 Name: Taiyyib Hussain Question: what was the effect of the five year plans on Russia and its people? In 1927 Stalin's advisers told him that with the modernisation of farming the Soviet Union would need extra 250,000 tractors. As well as tractors there was also a need to develop the oil fields to provide the petrol to drive the machines. Power stations also had to be built to supply the farms with electricity. Since the October Revolution industrial progress had been slow. It was not until 1927 that production had reached the levels achieved before the start of the First World War. Stalin decided that he would use his control over the country to increase production. The first Five Year Plan introduced in 1928, concentrated on the development of iron and steel, machine tools, electric power and transport. Joseph Stalin set the workers high targets. He demanded a 111% increase in coal production, 200% increase in iron production and 335% increase in electric power. He showed these demands by stating that if rapid industrialisation did not take place, the Soviet Union would not be able to defend itself against an invasion from capitalist countries in the west. Every factory had large display boards that showed the output of workers. Those that failed to reach the required targets were criticized and humiliated. ...read more.

Stalin introduced the machine tractor station in Russia, where collectives could borrow machinery and increase their productivity in return for payment in the form of crops. The five years plan was achieved in four years, and not five as scheduled. There was a huge expansion of energy production as new factories and towns needed power. Dams were created and other big projects improved Russia. Roads, railways and canals were constructed. Russia was able to increase manufacturing and therefore made more than enough preparations for war in future. However, the Five Year Plan was not all that successful. The exhausting demands placed on the workers meant that millions of them lived in harsh conditions, working on the big projects in Russia. The state tightened its control on the workers. The percentage of workers and people that go to school was treated extremely harshly. The large emphasis on heavy industries meant that consumer goods were high in demand. Shops were empty, clothing was in short supply and many household items were unavailable. The lack of consumer products was one example of the fall in the standard of living. Because of the huge population of people going into the cities from the countryside, there were insufficient medical facilities, houses and schools. Workers were poorly paid. Collectivisation was also part of the Five Year Plan, but it was less successful than industrialisation. ...read more.

By 1939, 3 out of 5 marshals and about half of the military officials had been purged. The Great Purges had affected Russians all over as they lived in constant fear that they would be arrested and jailed, tortured or shot. It was common for ordinary citizens to accuse their neighbours or even family members of criticising Stalin so as to project a patriotic and loyal image of them in the hope that they would not be killed. In this way, all sectors of society were affected. People of every religion and background were purged. Over 10 million people were sent to labour camps where they often died, while a million were executed. In conclusion the effect of the five year plans that had on Russia and its people was very bad. Stalin used clever methods to get a good outcome. He used methods such as collectivisation, and the purges to get things in right order. He threatened and killed many innocent people to persuade more people to understand his policies. His targets were high and he did get very near to get them achieved but at the end It made things worse. Joseph Stalin killed many innocent people he physically and mentally weakened Russian citizens by fear. Stalin's way of persuasion was very articulate and manipulative to the people of Russia. He achieved it in a secretive manner. This theoretically did not make Russia better in industry, agriculture or money because he threatened and killed many people which caused chaos in Russia. ...read more.