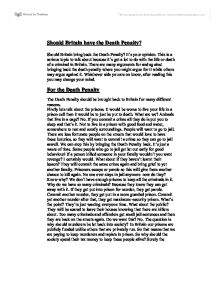 For and Against The Death Penalty

Should Britain have the Death Penalty? Should Britain bring back the Death Penalty? It's your opinion. This is a serious topic to talk about because it's got a lot to do with the life or death of a criminal in Britain. There are many arguments for and against bringing back the death penalty where you might argue for it while others may argue against it. Whichever side you are on know, after reading this you may change your mind. For the Death Penalty The Death Penalty should be brought back to Britain for many different reasons. Firstly lets talk about the prisons. It would be worse to live your life in a prison cell than it would be to just be put to death. What are we? Animals that live in a cage? No. If you commit a crime all they do is put you to sleep and that's it. Not to live in a prison with good food and water, somewhere to rest and comfy surroundings. People will want to go to jail. There are less fortunate people on the streets that would love to have these luxuries, so they will want to commit a crime so they can go to jail aswell. We can stop this by bringing the Death Penalty back. It's just a waste of time. Some people who go to jail get let out early for good behaviour! ...read more.

They're just getting what they wished, so they will be happy. The death penalty is justifiable. Removing harmful people from Britain would improve our society. Just imagine it. Britain would be a better and safer place. You would trust people more, let kids out of your sight more and feel happy in your own surroundings. Brining the Death Penalty back is the best for Britain, so think. Don't you want a better Britain? Against the Death Penalty The Death Penalty shouldn't be brought back no matter what to Britain for many different reasons. People in Britain should take a better look at what the Death Penalty brings across to all of us. But before you make up your minds hear the against side first. You may be surprised. Innocent people can be sentenced to death. What good is this? It just makes the Government look bad and the public loose more interest in them. Just say if your friend was sentenced to the Death Penalty and then soon you found out that they were innocent. How would you feel? Wouldn't you want to do something about it? What about speeding up the death penalty process? More innocent people would die! Once they're dead they can't be brought back can they? You can't release them from their grave but you can release them from prison. By just killing the killer, they learn absolutely nothing. ...read more.

What about your life ambitions? You wouldn't throw that away would you? Even if you are released when you're older from prison you're never too old to achieve anything. The Death Penalty doesn't deter murders. Other countries have had a Death Penalty for centuries and murders still happen. So what's the point? Why keep the Death Penalty when it clearly doesn't work? Killing someone isn't just a stroll in the park. It's a serious things and it involves many people and many lives. Articles 3 and 5 of the Declaration of the Human Rights state that you should have the right to life, the right to not be tortured or subject to any cruel, inhuman or degrading punishment. Lastly the Bible states, 'Thou shalt not kill'. So think of all that next time you hear about an execution. It was a medieval practice and that's it. It shouldn't be brought back at all. The person who thought and invented the idea that still goes strong today in some countries should have been shot straight away and this matter would of never been discussed about. Say NO to bringing back the Death Penalty! Conclusion In my opinion, yes, criminals should be punished in some way, but is the death penalty the way to go? I don't think it is. The Death Penalty shouldn't have even been thought about let alone actually being carried out in some countries. I could be here for hours telling you why my decision is not simple because all my decisions are based on all the facts on 'Against the Death Penalty'. ...read more.