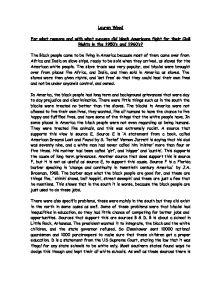 For what reasons and with what success did black Americans fight for their Civil Rights in the 1950's and 1960's?

Lauren Wood For what reasons and with what success did black Americans fight for their Civil Rights in the 1950's and 1960's? The Black people came to be living in America because most of them came over from Africa and India on slave ships, ready to be sold when they arrived, as slaves for the American white people. The slave trade was very popular, and blacks were brought over from places like Africa, and India, and then sold in America as slaves. The slaves were then given rights, and 'set free' so that they could lead their own lives and not be under anyone's control, and owned. In America, the black people had long term and background grievances that were day to day prejudice and discrimination. There were little things such as in the south the blacks were treated no better than the slaves. The blacks in America were not allowed to live their own lives, they wanted, like all humans to have the chance to live happy and fulfilled lives, and have some of the things that the white people have. In some places in America the black people were not even regarding as being humans. They were treated like animals, and this was extremely racist. A source that supports this view is source E. Source E is 'A statement from a book, called American Dreams Lost and Found by S. ...read more.

He did this because a woman was prosecuted for not giving up her seat on the bus for a white man. Independence and democracy for colonial countries elsewhere in the world, was another reason why the civil rights movement gained momentum at that time. An example of this was Britain, giving colonies independence in places like India, where they had been previously governed by Britain. Now those colonies had their own leaders, and independence. Therefore, there are plenty of reasons why the blacks should fight for their civil rights in the 1950's and 1960's. The next section of they essay looks at the success that the black people had in their fight for equal rights, and fair treatment, both by the law and by the American people. I think success in this case should be that black people were more and more accepted into society, and that they were on their way to achieving equality before the law, and in society itself. There were various laws passed to help this, and in 1983-84 Jesse Jackson, became the first black person to make a realistic bid to become president of the United States. One thing that would suggest success, was that black people were allowed to sit anywhere on public buses. The Supreme Court in America declared that all state laws in Alabama on segregation on buses were unconstitutional. ...read more.

Another limiting factor on success was that big businesses were controlled by whites for the benefit of the white people, for example, banks refused to lend money to people living inn 'black' areas. There was a move towards affirmative action, where a certain proportion of black or other disadvantaged groups of people had to be employed in big businesses, even if they were less qualified than other applicants. However, there is still evidence today to suggest that black Americans are worse off than whites. William Moore, a white postman, was shot because he was campaigning for civil rights. He started a walk across the south to do this. One day he was shot, probably by the Ku Klux Klan. Thousands of protestors carried on the walk. This could be seen as a limiting factor on success because, this man was shot and killed because he was speaking up for what he believed in. So in effect, the black people did campaign successfully for their freedom, and the rights that they were entitled to, and thanks to the civil rights act of 1964 and 1965. They were successful to a certain extent, but there is still evidence to suggest that blacks, even today, are not equally treated in America and there were factors described above that would suggest that success was limited. There is still today, a long way to go before the black people of America can be treated equally with the white people. ...read more.