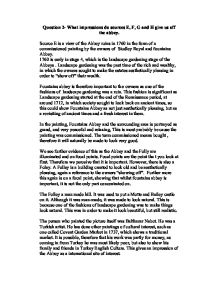 Question 2- What impressions do sources E, F, G and H give us off the abbey. Source E is a view of the Abbey ruins in 1760 in the form of a commissioned painting by the owners of Studley Royal and fountains Abbey. 1760 is early in stage 4, which is the landscape gardening stage of the Abbeys . Landscape gardening was the past time of the rich and wealthy, in which the owners sought to make the estates aesthetically pleasing in order to "show off" their wealth. Fountains abbey is therefore important to the owners as one of the fashions of landscape gardening was a ruin. This fashion is significant as Landscape gardening started at the end of the Renaissance period, at around 1712, in which society sought to look back on ancient times, so this could show Fountains Abbey as not just aesthetically pleasing, but as a revisiting of ancient times and a fresh interest in them. In the painting, Fountains Abbey and the surrounding area is portrayed as grand, and very peaceful and relaxing, This is most probably because the painting was commissioned. ...read more.

For example building the tower could be interpreted by them as aspiring to God. Source G is an artists reconstruction of the chapel of the 9 altars. The reconstruction is modern from the end of stage 4 in the 20th century, but the painting is of it after is resurrection in the 1480's. One thing we see with source G is the chapel is illuminated from the big stain glass windows. This gives an impression of grandness of the abbey, so we can get the impression that at this time the abbey was very rich. It also shows they are getting greedy as they spending lots of money where it is not needed. However, we could get the impression that they are glorifying God. This is because they have spent lots of money on it. The reason for this is to make the chapel look good. So, why are they making it look good? Some would say to glorify God, so we can get the impression that although they are getting richer, they are still loving God and glorifying him. The artist has decided to illuminate them. ...read more.

However, there is only so long the family will keep going. So, this is the clever marketing. When the children grow up and have their own children, they remember the Abbey as a place of pleasant memory's. Therefore, they go with there children. This shows the Abbey's owners, the national trust, are thinking to the future for further sources of income. We can see further evidence of diversification. For example, 'in the west of Europe' shows they are going international. Why are they going international? Because people in other cultures do not normally have the opportunity to experience English history. Therefore; as soon as they come to England, they hope to see as much as they can before they go. So, as they advertise it as 'the second biggest national trust site' to tourists with not much experience of the Uk, they will automatically go to the biggest places near where they are staying. It also attracts tourists with ' a beautiful place'. They want to go and see the best of the English countryside. So by going here, they are fulfilled twofold; once via the history and twice by the English countryside. So overall the national trust are making Fountains abbey and Studley royal are making fountains abbey appeal to as many people as possible. ...read more.