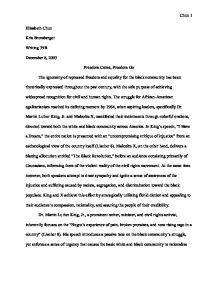 Elizabeth Chun Kris Bromberger Writing 39B December 8, 2003 Freedom Come, Freedom Go The ignominy of repressed freedom and equality for the black community has been rhetorically expressed throughout the past century, with the sole purpose of achieving widespread recognition for civil and human rights. The struggle for African-American egalitarianism reached its defining moment by 1964, when aspiring leaders, specifically Dr. Martin Luther King, Jr. and Malcolm X, manifested their indictments through colorful orations, directed toward both the white and black community across America. In King's speech, "I Have a Dream," the entire nation is presented with an "uncompromising critique of injustice" from an eschatological view of the country itself (Lischer 8). Malcolm X, on the other hand, delivers a blazing allocution entitled "The Black Revolution," before an audience consisting primarily of Caucasians, informing them of the violent reality of the civil rights movement. At the same time however, both speakers attempt to draw sympathy and ignite a sense of awareness of the injustice and suffering caused by racism, segregation, and discrimination toward the black populace. King and X achieve this effect by strategically utilizing florid diction and appealing to their audience's compassion, rationality, and assuring the people of their credibility. ...read more.

On the contrary, King emphatically seeks to promote a nonviolent revolution, for he states: In the process of gaining our rightful place we must not be guilty of wrongful deeds. Let us not seek to satisfy our thirst for freedom by drinking from the cup of bitterness and hatred. We must forever conduct our struggle on the high plane of dignity and discipline. We must not allow our creative protest to degenerate into physical violence (King 533). King advocates a peaceful approach in the black struggle for civil and human rights. He reasons with his audience, stressing that "the marvelous new militancy which has engulfed the Negro community must not lead us to a distrust of all white people; for many of our white brothers...have come to realize that their destiny is tied up with out destiny and that their freedom is inextricably bound to our freedom" (King 533). This is a part of King's dream that is directed toward both the black and white people, suggesting the prospect of peace and harmony between them. Like Dr. King, Malcolm X, a writer, lecturer, and political activist for the Black Revolution, tends to render pictorial messages of repressed freedom to his friends and enemies of both the white and black community in America. ...read more.

X goes on to state, that "the only way without bloodshed that this [revolution] can be brought about is that the black man has to be given full use of the ballot in every one of the fifty states" (X 547). This appeals to the white, authoritative figures in America, who are concerned about the uprising and would go far to prevent bloodshed from occurring. Both Dr. King and Malcolm X are aware of the prolonged inequality between the white and black communities and attempt to publicly relay their indictments of the situation through use of different rhetoric strategies. Dr. King presents his argument with a passive overtone and embellished language that allow listeners to respond with sympathy and a renewed hope for justice and equality. On the other hand, Malcolm X forcefully conveys the urgent need for whites to be prepared for a revolution and for blacks to get involved immediately. He achieves this through his straightforward oration that motivates if not intimidates his audience to respond actively. Nonetheless, both leaders share one common purpose in their speeches - that is a future showing "all of God's children, Black men and white men...able to join hands and sing in the words of the old Negro spiritual: 'Free at last! Free at last! Thank God almighty. We are free at last!'" (King 535). ...read more.