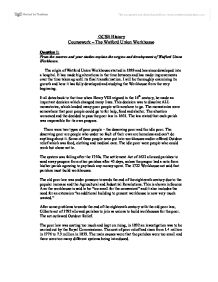 From the sources and your studies explain the origins and development of Watford Union Workhouse.

GCSE History Coursework - The Watford Union Workhouse Question 1: From the sources and your studies explain the origins and development of Watford Union Workhouse. The origin of Watford Union Workhouse started in 1838 and has since developed into a hospital. It has made big alterations in the time between and has made improvements over the time taken up until its final transformation. I will be thoroughly examining its growth and how it has fully developed and studying the Workhouse from the very beginning. It all dates back to the time when Henry VIII reigned in the 16th century, he made an important decision which changed many lives. This decision was to dissolve ALL monasteries, which landed many poor people with nowhere to go. The monasteries were somewhere that poor people could go to for help, food and shelter. The situation worsened and the decided to pass the poor law in 1601. The law stated that each parish was responsible for its own paupers. There were two types of poor people - the deserving poor and the idle poor. The deserving poor are people who under no fault of their own are homeless and can't do anything about it. Some of these people were put into workhouses and/or offered Outdoor relief which was food, clothing and medical care. The idle poor were people who could work but chose not to. The system was failing after the 1750s. The settlement Act of 1622 allowed parishes to send away paupers from other parishes after 40 days, unless the pauper had a note from his/her parish agreeing to pay back any money spent. ...read more.

Source C is a history source from a book called The History of Watford written in 1970, it shows us how the Watford Workhouse has been developing and the number of poor people who were staying there and the previous year. It also tells us how much poor relief for the fortnight there was and also the year before. The numbers of "inmates" (suggesting imprisonment) in December 1882 were 224 people, a year later it was 252. The numbers are inaccurate and don't give the exact amount of people in the whole workhouse. The numbers weren't really increasing though and it shows that the workhouse is not growing. Three years after the Second World War and the introduction of the NHS both in 1948, the Watford Union Workhouse was experiencing it's final transformation into Watford General Hospital. This made good use of the workhouse as there was plenty of space and buildings to be used for a hospital, this was also typical of workhouses and many nationally reformed into hospitals. After looking at the origin of Watford Union Workhouse and it's current state as Watford General Hospital and all the different developments and relocations in between, the workhouse has come a long way and I think the idea of a hospital has been it's best change to date. Having a new hospital will benefit many and will do what it has only been doing since the start and that is looking after and caring for other people. ...read more.

Unlike Source E you can now tell of the scale of the buildings and see how large the buildings were which was surprising as it was quite big. The trip didn't completely let me get a feel of a workhouse as it was a hospital now and I could not tell what made it much different from before and now that it has changed. I also couldn't tell what buildings were part of the workhouse before and there were new buildings too. Much has changed since the time of the workhouse and there isn't that much to look at. Overall I think that the two sources D and E have been quite useful and helped me in researching the Watford Union Workhouse. In source D, you were told about the construction, changes and its current development into the Watford General hospital. It also makes notes on the problem and how it has not been resolved after many different changes. In source E, it tells us of the location and the overall plan of the Watford Union Workhouse and it's surroundings. The sources are useful to a certain extent and should be further studied and you can only make guesses to find information you may need. The trip I took to the workhouse was somewhat useful as it brought the whole workhouse investigation alive and you can get a feel for what its like and realise the area and location of the workhouse. The website was helpful also as it provided some information and showed some pictures of the workhouse outside and within. ...read more.