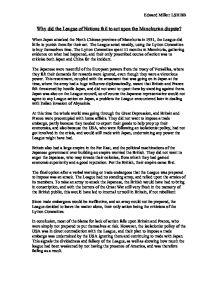 Why did the League of Nations fail to act upon the Manchurian dispute? When Japan attacked the North Chinese province of Manchuria in 1931, the League did little to punish them for their act. The League acted weakly, using the Lytton Committee to buy themselves time. The Lytton Committee spent 11 months in Manchuria, gathering evidence on what had happened, and their only prescribed course of action was to criticise both Japan and China for the incident. The Japanese were resentful of the European powers from the treaty of Versailles, where they felt their demands for rewards were ignored, even though they were a victorious power. ...read more.

At this time the whole world was going through the Great Depression, and Britain and France were preoccupied with home affairs. They did not want to impose a trade embargo, partly because they needed to export their goods to help prop up their economies, and also because the USA, who were following an isolationist policy, had not got involved in the crisis, and would still trade with Japan, undermining any power the League might have had. Britain also had a large empire in the Far East, and the political machinations of the Japanese government over building an empire worried the British. They did not want to anger the Japanese, who may invade their colonies, from which they had gained economic superiority and a good reputation. ...read more.

Since trade embargoes would be ineffective, and an army could not be prepared, the League decided to leave the matter alone, their only action being the criticism of the Lytton Committee. In conclusion, most of the blame for lack of action falls upon Britain and France, who were simply not prepared to put themselves at risk. However, the isolationist policy of the USA was in direct contradiction with the League, and their plan to impose a trade embargo was undermined by the USA ignoring them and continuing to trade with Japan. This signals the dividedness and fallacy of the League, as well as showing how much the league had been weakened by not having the presence of America, and was therefore failing as a result. ?? ?? ?? ?? Edward Millett LSH BB ...read more.