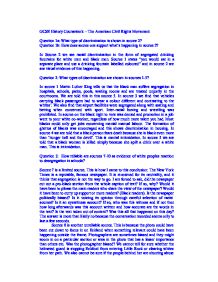 GCSE History Coursework - The American Civil Rights Movement Question 1a: What type of discrimination is shown in source 2? Question 1b: How does source one support what's happening in source 2? In Source 2 we see racial discrimination in the form of segregated drinking fountains for white men and black men. Source 1 states "you would eat in a separate place and use a drinking fountain labelled coloured" and in source 2 we see visual evidence of this happening. Question 2: What types of discrimination are shown in sources 1-5? In source 1 Martin Luther King tells us that the black man suffers segregation in hospitals, schools, parks, pools, waiting rooms and are treated unjustly in the courtrooms. We are told this in this source 5. In source 3 we find that vehicles carrying black passengers had to wear a colour different and contrasting to the whites'. We also find that airport facilities were segregated along with seating and betting when concerned with sport. Inter-racial boxing and wrestling was prohibited. In source on the black right to vote was denied and promotion in a job went to your white co-worker, regardless of how much more talent you had. ...read more.

The evidence used in these sources is limited and the implications made are determined by personal interpretation and above all most of the evidence is biased either towards or against blacks. Because the evidence is biased, either towards or against blacks. Because the evidence is biased and some sources contradict others it is made very hard to conclude with this evidence. Also, concerning personal interpretation it all depends on the attitude of the historian and attitudes will change undoubtedly over the next decade or so and will probably continue to change until the end of that historian's life. Despite the improvement blacks have experienced, a lot more improvements need to be made. Source 2 is an easily analysed source. It shows a segregates drinking fountain. This is not likely to be biased but we must still ask who took the photo? , Was he/she biased? , Has he/she left anything out of the picture for any reason? Also, what was the photograph taken? It is possible it was taken for a neutral source, as there is no caption. Given the right caption, this image could have a very different meaning where the photo is concerned. Source 3 tells us of the various different forms of segregation in waiting rooms, seating where sport was concerned, transport, inter-racial boxing and in other airport facilities. It simply states what the laws were. ...read more.