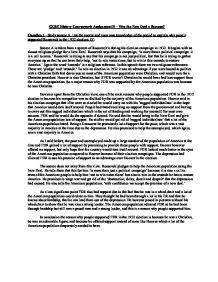 GCSE History Coursework Assignment B - Was the New Deal a Success?

GCSE History Coursework Assignment B - Was the New Deal a Success? Question 1 - Study source A. Use the source and your own knowledge of the period to explain why people supported Roosevelt in the 1932 election. (5) Source A is taken from a speech of Roosevelt's during his election campaign in 1932. It begins with an almost religious pledge for a New Deal. Roosevelt says that his campaign, 'is more than a political campaign: it is a call to arms.' Roosevelt is trying to say that his campaign is not just political, but that he is trying to gather everyone up so that he can have their help, 'not to win votes alone, but to win in this crusade to restore America.' Again the word 'crusade' is a religious reference. In this speech there are two religious references. These are 'pledge' and 'crusade.' To win an election in 1932 it was an advantage if you were bound to politics with a Christian faith that drove you as most of the American population were Christian, and would vote for a Christian president. Hoover is also Christian, but if FDR weren't Christian he would have had less support from the American population. So a major reason why FDR was supported by the American population was because he was Christian. However apart from the Christian view, one of the main reasons why people supported FDR in the 1932 election is because his competitor was so disliked by the majority of the American population. Hoover said in his election campaign that if he were re-elected he would carry on with his 'rugged individualism' in the hope that America would turn itself around. People had hated receiving no support from the government and having to carry out this rugged individualism which is the act of fending and working for yourself, for your own success. FDR said he would do the opposite if elected. ...read more.

He is leaving and as the title, 'getting rid of the rubbish' suggests, not only is the rubbish ideals and policies being gotten rid off but Hoover himself is also being gotten rid off. He has a time table in his hand which could represent two things. Either that the time table is a train or bus time table, showing that he is going away, or it is FDR's timetable of what he is going to do to reform America and he is looking at it with an expression you can imagine that he is saying to himself, 'if only I would have done that.' This source is not negative like source E but very positive and tells us Roosevelt is going to restore America to greatness now that he has got rid of Hoover and his ideals and policies. It tells the American population not to fear as FDR is here and he is going to support and lead us out of the depression. Source G pictures FDR looking like a conman with a hat in one hand and a bag labelled 'New Deal Remedies.' He has come to try and remedy the poorly Uncle Sam representing America. The table next to Uncle Sam Is full of loads of remedies, each with an alphabet agency labelled on it, the NRA being the most noticeable. Even though this table is full of remedies already he has come with even more New Deal remedies and is looking back at the nurse representing congress. FDR's caption is 'of course we may have to change remedies if we don't get results. The source reminds me a lot of source E. Both have captions which give the impression of FDR being unsure of what he is doing. In source E he is careless, but in this source he is simply looking like a conman who does not even know if the many remedies he has tried will work. ...read more.

It does support the view that it made, 'people dependent on the government.' We can see from this that four sources agree with interpretation A, five sources agree with interpretation B and the remaining two sources don't agree with either and this is all to varying extents of course. Therefore the sources show a majority that agree with interpretation B that, 'The New Deal wasted a lot of money; it made people dependent on the government and led to the government becoming too powerful. It did not solve America's economic problems - the Second World War did that.' However my overall view is different. The main aims of the New Deal were the recovery of industry and agriculture, and to get people back to work. To a certain extent is did achieve these. There is no doubt that between 1933 and 1936 there was a degree of recovery as unemployment was reduced and businesses were revived. However in 1937 when the government began to spend less money on its schemes, production fell again and a second wave of depression hit. It was clear that continual injections of money were needed to prevent the situation getting any worse. Only in 1941 did the USA really become involved in the war and then the demand for American manufactured goods increased dramatically and the economy was lifted out of the depression. In the end Roosevelt had succeeded. He had done all he could to better the situation in America, and pouring money into helping them seemed to work. Roosevelt in my view had done a great job and we cannot really ask any more of him. He did as best a job he could, using his resources wisely, and in the end did what the majority of the population needed. So in conclusion after reading the sources and considering my own knowledge I have come to the conclusion that the first interpretation is right. Roosevelt did help many Americans and he did regain confidence amongst Americans which helped lift them out of the depression. The war was simply and aid to help America recover quicker. ...read more.