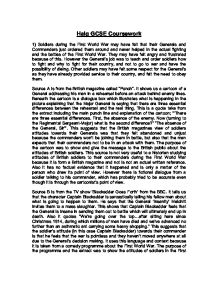 Haig GCSE Coursework 1) Soldiers during the First World War may have felt that their Generals and Commanders just ordered them around and never helped in the actual fighting and the battles of the First World War. They may have felt angry and frustrated because of this. However the General's job was to teach and order soldiers how to fight and why to fight for their country, and not to go to war and have the possibility of dieing. Other soldiers may have felt some respect for the General's as they have already provided service to their country, and felt the need to obey them. Source A is from the British magazine called "Punch". It shows us a cartoon of a General addressing his man in a rehearsal before an attack behind enemy lines. Beneath the cartoon is a dialogue box which illustrates what is happening in the picture explaining that the Major General is saying that there are three essential differences between the rehearsal and the real thing. This is a quote take from the extract including the main punch line and explanation of the cartoon; "'There are three essential differences. First, the absence of the enemy. Now (turning to the Regimental Sergeant-Major) what is the second difference?" "The absence of the General, Sir"'. This suggests that the British magazines view of soldiers attitudes towards their Generals was that they felt abandoned and unjust because the commanders won't be joining them in battle, but also that the man expects that their commanders not to be in an attack with them. The purpose of the cartoon was to show and give the message to the British public about the attitudes of British soldiers. This source is not very useful to a historian studying attitudes of British soldiers to their commanders during the First World War because it is form a British magazine and not is not an actual written reference. ...read more.

However, this source is not entirely reliable because again it is a one-sided point of view and is produced in a way that is rebellious, comical way which mocks General Haig. Although it is still quite useful because it shows what other people's views are about General Haig, giving another side to the story. Source E is three different extracts form Haig's diary showing his own view on the Battle of The Somme and trench warfare. It tells us Haig's views prior to the Battle of the Somme, the day before the Battle of the Somme and the day of the Battle of the Somme. Haig's view in the first extract written prior to the Battle of the Somme in June 1916 is very realistic which says things like "The nation must be taught to bear losses" and "The nation must be prepared to see heavy casualty lists". This suggests that Haig knew what will happen on the day of the Battle of the Somme, and that it will be a day in which Britain will lose many lives informing people that they should be prepared for what is about to happen. The second extract written on 30th June 1916, the day before the attack began is a very reassuring and generally good message about the soldier's welfare and mind state. It says "The men are in splendid spirit" and "The barbed wire has never been so well cut nor the artillery preparation so thorough." This suggests Haig is full of confidence and believes he is doing the right thing because of the things soldiers have said about him and has been done in preparation. It gives this impression also by the language and context used in the extract. The final third extract written on the 1st of July 1916, the day of the Battle of the Somme is quite unreliable because it shows almost what is a frightened message written in denial of what is happening. ...read more.

It tells us about what is expected and what every soldier must follow. It says "Victory will belong to the side that holds out the longest. There is no other course open but to fight it out. Every position must be held to the last man. There must be no retirement. With our backs to the wall and believing in the justice of our cause each one of us must fight on to the end." This strongly suggests that General Haig thought that victory will only be received, if the British stuck it out the longest even though there would be many deaths and casualties, there must be no giving up, or backing out and that every man shall hold every position and fight to the end until the enemy is destroyed. This source therefore does support Keegan's interpretation of Haig. However, this source is not entirely reliable because it was written by General Haig and therefore biased and was also issued after the bloodiest day in history, the Battle of the Somme. It is still very useful though as it a written document issued to every member in the British Armed Forces by General Haig. This supports Keegan because it is sufficient evidence to back up his interpretations. In conclusion, sources C to L do provide sufficient evidence to support John Keegan's statement that Haig was a "highly skilled soldier". Throughout the sources more of them give evidence to back up Keegan's interpretations than go against them. Most of the sources do support Keegan's interpretations because they are written by people involved with Haig or historians. For instance, the quote "Haig was the product of his time, of his upbringing, education, training and previous military experience. On argument goes that he was, ultimately, victorious and, even if he had been replaced, would there have been anyone better for the job?", is written by a modern historian in a book which informs students at GCSE level about General Haig, and does ultimately support John Keegan's interpretations. ...read more.