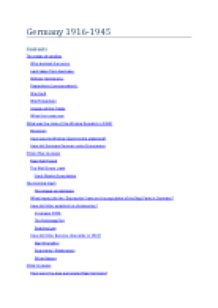 ﻿Germany 1916-1945 ________________ Contents The treaty of versilles Who decided the terms: Land taken from Germany: Military restrictions: Reparations (compensation): War Guilt War Prevention Impacts of the Treaty What the treaty was What was the state of the Weimar Republic in 1925? Extension How was the Weimar Government organised? How did Germany Recover under Stresemann Hitlers Rise to power Beer Hall Putsch The Wall Street crash Stock Market Speculation The Coming Crash The Impact on Germany What impact did the ?Depression? have on the popularity of the Nazi Party in Germany? How did Hitler establish his dictatorship? In January 1933: The Reichstag Fire Enabling Law How did Hitler Become chancellor in 1933? Nazi Strengths: Opponents? Weaknesses Other factors Hitler In power How were the Jews persecuted Nazi Germany? How successful were Hitler?s economic policies 3 Aims of the Economic Policy Preparing for war Making Germany Self Sufficient Reducing unemployment Were people more prosperous under the Nazi rule What was the role of Women in Nazi Germany Nazi Ideals about Women Why The Nazis wanted women to stay at home: Incentives for women to become mothers. NAZI GERMANY Keeping Control: Terror State The Terror State Propaganda Popularity Etc. Did most people benefit from Nazi rule? Nazi control of Germany, 1933-1945 Method of Control Controlled By Duties How it helped Hitler to make his position secure The treaty of versilles Who decided the terms: The main allies met at the Paris peace conference and were known as the big three. Prime Minister David Lloyd George for Britain President Woodrow Wilson for the USA Prime Minister Georges Clemenceau for France Land taken from Germany: 1. Alcase-Lorraine given to France 2. Upper Silesa given to Poland 3. West Prussia to Poland 4. East Prussia to Lithuania 5. Saarland, run by League of Nations and then a plebiscite to be held after 15 years 6. North Shleswog to Denmark Germans overseas territories also went. ...read more.

6. Source 41 supports Craig?s view because it shows the Nazis trying to scare the country by saying that if you support the communist party the communists will torture you. How did Hitler establish his dictatorship? Nazi Consolidation of Power was mainly between 1933-1934 In January 1933: 1. Hitler had limited power 2. Only 3 of the 11 government ministers were Nazis 3. Nazis had less than half the seats in the Reichstag 4. Hindenburg, just as he had appointed Hitler, could sack him if he failed to govern effectively 5. Result: Hitler looks to strengthen his position 6. Calls an election in March 1933 to try to win a majority in the Reichstag The Reichstag Fire 1. The Reichstag Burnt down in 27th of February 1933 2. Hitler blamed it on the communist and said they did it to show their dislike for the Nazis. A man named Marnius Van Lubbe admitted to it 3. Hindenburg gave him emergency powers through article 48 4. For a couple of weeks all other parties were not allowed for propaganda, arrest people and break up meetings of other parties Enabling Law 1. The enabling law allowed Hitler to pass laws without having to consult with government. 2. 444 were in favour of the enabling law while 94 voted against. They were mostly killed 3. Apon Entrance to the new building any MP had to walk between two lines of SA and SS and HY (Hitler youth) 4. The SS pointed guns at people in a vote. 5. It officially gave him 4 years that he could pass any law he wanted. 6. The communists were banned. 7. The Catholic party allowed the Catholic party to be in charge of Catholic Schools. 8. Hitler knew how the Judiciary and Civil Service had undermined the Weimar Republic so he set up a clever policy and started to do deals with other partys. ...read more.

The wall street crash plummeted Germany into economical despair as they could not pay the reperations but as they stopped paying repreations and started making most of their food for themselves they began to do better. Germans no longer needed to feel inferior to other states, they can be proud of their country: Although the german economy had recovered in some way, they lived in a state of terror and could not have free speech as other countries could. However the evidence suggests that in the 1930s members of nazi Germany did not lose their self intrest and had a strong sense of national pride. Nazi control of Germany, 1933-1945 Method of Control Controlled By Duties How it helped Hitler to make his position secure Concentration Camps were used as an ultimate sanction against their own people.The first were built in 19333. This was run by the SS Death heads units. They were used to make Prisioners suffer through harsh discipline, starvation beatings and random executions. This meant that Hitlers opponents were killed and never re appear again. The Police and courts helped prop up the Nazi dictorship by giving top jobs to senior Nazis and the Nazis therefore were in charge of the courts and police The police and Judges and Attorneys reported to Himmler Their duties were to keep Nazi law but also do political snooping and ignore crimes committed by Nazis and make sure Nazism opponents did not get a vice versa. This helped Hitler Squelch his opponents and stop political parties getting uprisings by crushing them quickly The SS This method of control was to scare the ordinary people to spill secrets so that no uprisings could start This was controlled by The Gestapo who were the secret state police. They were in turn lead by Reinhard Heyudrich Their duties included getting secret information, arresting citizens on suspicion and sending them to concentration camps without reason Modern research shows that The Gestapo was more feared than they should have been and this helped no trouble or political parties begin for hitler ...read more.