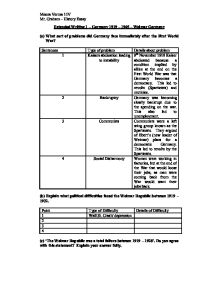 Germany 1919 - 1945 - Weimar Germany - What sort of problems did Germany face immediately after the First World War?

Extended Writing 1 - Germany 1919 - 1945 - Weimar Germany (a) What sort of problems did Germany face immediately after the First World War? Sentences Type of problem Details about problem 1 Kaisers abdication leading to instability 9th November 1918 Kaiser abdicated because a condition implied by allies at the end on the First World War was that Germany becomes a democracy. This led to revolts (Sparticists) and mutinies. 2 Bankruptcy Germany was becoming slowly bankrupt due to the spending on the war. This also led to unemployment. 3 Communists Communists were a left wing group known as the Sparticists. They argued of Ebert's (new leader of Weimar) plans for a democratic Germany. This led to revolts by the Sparticists. 4 Social Disharmony Women were working in factories, but at the end of the War that would loose their jobs, as men were coming back from the War would want their jobs back. (b) Explain what political difficulties faced the Weimar Republic between 1919 - 1932. Point Type of Difficulty Details of Difficulty 1 Wall St. ...read more.

In 1923 French and Belgium troops occupied the Ruhr land to take what was owed to the allies in the form of raw materials and products. The Ruhr land was Germanys most economic area. Ebert instructed workers in the Ruhr to follow the policy of passive resistance. This meant that the workers refused to work and produce goods or raw materials. The first effect on the Weimar Republic during Ruhr land crisis was humiliation. This was because for a nation with a long and proud military, soldiers such as Hitler were ashamed that passive resistance was used instead of using the German army to evict invaders. The effect of passive resistance on the Germany economy was that it brought the German industry almost to a standstill. Germany was not providing wealth, but instead of failing to print fewer notes, the Government began to print more. Soon printing presses were working flat out to cope with the quick rising inflation, which caused hyperinflation. The suffering of small businesses, farmers and thrifty citizens was the effect of hyperinflation. ...read more.

They built up their strength through youth organisations and recruitment drives. Although people may think that the Weimar Republic was a total failure during 1919 - 1928, it did have many successes; the Dawes Plan was one of them. The Dawes Plan was a treaty signed in 1924 between France and USA. The treaty was based on the lending of USA's money to France so that France could begin to rebuild itself after almost being destroyed after the First World War. This treaty also reduced conflict. This is because the France troops were only in the Ruhr land because it didn't get its share of the reparations it was owed by Germany, but when USA offered to help and gave money to France, France no longer needed that money form Germany for a period of time. This helped Germany as it didn't have to use passive resistance in the Ruhr land and it didn't have French or Belgium troops in its land. France could begin to rebuild and Germany could begin to produce goods again to make money to pay the reparations. Another success of the Weimar Republic was the Meena Verma 11V Mr. Graham - History Essay ...read more.