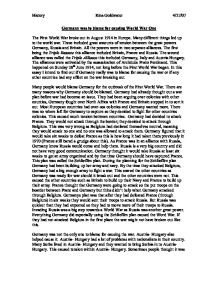 Germany was to blame for causing World War One.

Germany was to blame for causing World War One The First World War broke out in August 1914 in Europe. Many different things led up to the world war. These included great amounts of tension between the great powers Germany, Russia and Britain. All the powers were in two separate alliances. The first being the Triple Entante this alliance included Britain, France and Russia. The second alliance was called the Triple Alliance this included Germany, Italy and Austria Hungary. The alliances were activated by the assassination of Archduke Franz Ferdinand. This happened on Sunday 28th June 1914, not long before the First World War began. In this essay I intend to find out if Germany really was to blame for causing the war or if any other countries had any effect on the war breaking out. Many people would blame Germany for the outbreak of the First World War. There are many reasons why Germany should be blamed. Germany had already thought out a war plan before war had become an issue. They had been arguing over colonies with other counties, Germany fought over North Africa with France and Britain stepped in to sort it out. Most European countries had over-sea colonies and Germany wanted more. ...read more.

This also created friction between the countries that wanted the colonies. Some of the countries involved wanted national self determination; this only made other countries jealous and made them not to want the other country to have national self determination. I feel the main problem that all the countries were guilty of was not communicating with one and other. If they would have sat down and discussed their problems civilly instead or turning to war them things may have been sorted out with out the blood shed. I think that Germany was to blame for causing the war but so were all the other countries. Germany simply stared the fighting side of the war but all the other countries were either planning of war or had already decided who they wanted to attack. If Germany hadn't attacked France through Belgium then the war probably would have happened anyway but in a different way. There was a lot of colonial, economic and alliance based rivalry and the countries involved needed to sort it out. If the war did not break out when it did and how it did it would have happened in another way. I think Germany should be blamed as they started the attacks and they started to scare everyone by building up their army. Every country involved had their part to play in causing the Word War, Germany just happened to be the one that started it. History Rina Goldwater 4/27/07 ...read more.