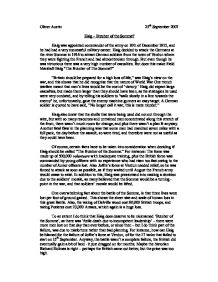 Haig – Butcher of the Somme?

Haig was appointed commander of the army on 10th of December 1915, and he had had a very successful military career. Haig decided to attack the Germans at the river Somme in 1916 to attract German soldiers from the town of Verdun where they were fighting the French and had almost broken through. But even though he was victorious there was a very high number of casualties. But does this make Field Marshall Haig "The Butcher of The Somme?”

“Britain should be prepared for a high loss of life,” was Haig’s view on the war, and this shows that he did recognise that the nature of World War One trench warfare meant that men’s lives would be the cost of ‘victory.’ Haig did expect large casualties, but made them larger than they should have been, as the strategies he used were very outdated, and by telling his soldiers to "walk slowly in a line towards the enemy" he, unfortunately, gave the enemy machine gunners an easy target. A German soldier is quoted to have said, “No longer call it war, this is mere murder.”

Haig also knew that the shells that were being used did not cut through the wire, but with so many resources and untrained men concentrated along this stretch of the front, there wasn’t much room for change, and plus there wasn’t a plan B anyway. Another fatal flaw in the planning was that some men had marched seven miles with a full pack, the day before the assault, so were tired, and therefore were not as useful as they could have been.

Of course, certain facts have to be taken into consideration when deciding if Haig should be called “The Butcher of the Somme.” For instance: The force was made up of 500,000 volunteers with inadequate training, plus the British force was commanded by young officers with no experience who had risen too fast owing to the number of Junior officers lost. Also Joffre’s force at Verdun needed relief, so he was forced to attack as soon as possible, as if they waited until August the French army would cease to exist. In addition to this, Haig was pressurised into making a decision due to the soldiers’ morale, as many believed that the Somme would be a turning-point in the war, and that soldiers’ morale would be lifted.

One overwhelming fact about the battle of the Somme, is that three lives were lost per foot of ground gained. This shows the sheer size and scale of human loss in this great Battle. Also, the taking of Delville wood cost 80,000 British troops, and taking Pozieres cost 23,000 Anzacs, which again is a huge loss.

To an extent I do think that Haig does deserve to be nicknamed ‘Butcher of the Somme’, as there was ‘futile death due to incompetent leadership’ – there were more men lost on that day than ever before, or since then – but I do think part of the failure, was due to misfortune rather than bad planning. For instance, how can Haig be blamed for the failure of Joffre’s force at Verdun, of for the 17 tanks that failed to start on 15th September. Anyway, the battle wasn’t a complete failure, the British did eventually gain a bit of land - it just dragged on for months. Maybe the historian Richard Holmes is right – perhaps the British came out better, but the price was too high.