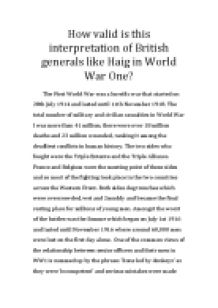 Transfer-Encoding: chunked ﻿How valid is this interpretation of British generals like Haig in World War One? The First World War was a horrific war that started on 28th July 1914 and lasted until 11th November 1918. The total number of military and civilian casualties in World War I was more than 41 million; there were over 18 million deaths and 23 million wounded, ranking it among the deadliest conflicts in human history. The two sides who fought were the Triple Entente and the Triple Alliance. France and Belgium were the meeting point of these sides and so most of the fighting took place in the two countries across the Western Front. Both sides dug trenches which were overcrowded, wet and 2muddy and became the final resting place for millions of young men. Amongst the worst of the battles was the Somme which began on July 1st 1916 and lasted until November 1916 where around 60,000 men were lost on the first day alone. One of the common views of the relationship between senior officers and their men in WW1 is summed up by the phrase: 'lions led by donkeys? as they were ?incompetent? and serious mistakes were made that cost many lives. However, the victories of 1918 demonstrated that they learnt from those mistakes and were actually ?competent leaders?. During World War One, Haig was called a ?butcher? as he said that the nation must be taught to bear loses and the public should be prepared to see heavy casualty lists. He also said that losing one-tenth of Britain?s men in three years wasn?t a big price to pay. The generals made many stupid mistakes, for example Rawlinson didn?t tell Haig or any other generals that the soldiers were getting tangled in the barbed wire and ordered staff to recall and destroy notes issued as guidance for attack. This is made worse by the fact that Haig didn?t take responsibility for many of his mistakes and, as said in Source B1, ?Haig and other British Generals must be blamed for wilful blunders and wicked butchery.? as ?they knew what they were doing?. ...read more.

6 months were spent planning and 20,000 men died and 60,000 injured on the first day. They lost the battle by 3 minutes but if they were ordered to charge, they would?ve been on the German Front before the German?s could reassemble. This source was written by David Lloyd George, the British Prime Minister during the First World War. He was writing in a book about his war-time experiences, War Memoris written in 1935, therefore it is a primary source and he has the interpretation that the British were ?lions led by donkeys?. Lloyd George was as surprised as everyone else by the outbreak of the war and in July 1914, he made a speech about advocating ?economy?, saying that Britain?s relations woth Germany were the best they had been in many years. He insisted that Britain would keep out of the impending war and he seemed likely to resign if Britain intervened. He reaimed in office as Chancellor of Exchequer for the first year of the war and gained a ?heroic? repution fo his work as Minister of Munitions, 1915-16. Lloyd George often found himself coming into conflict with Sir Douglas Haig, whom he did not trust. In particular, Lloyd George found the cost in human terms of Haig's battles to be reprehensible. He took the responsibility of arms production away form the generals and gained respect for improving administrative capabilities and increasing outputs. In June 1916, Lloyd George suceeded Lord Kitchener as Secretary of State for War. Being Prime Minister, Secretary of State for War and Minister of Munitions, he would?ve had access to enclosed information. For both Haig and his armies, the battles of 1916/18 were a painful and bloody learning process but by 1918, some historians argue, both Commander and troops were highly effective resulting in victory. ?So far during war, our leadership has been flawless - perfect.? Haig and his subordinate generals learned from experience - how to fight the war in a new style, with effective co-operation artillery, tanks, aircraft and infantry - the principle of ?bite and hold?. ...read more.

The British attempted to press their advance and over the next two weeks they made a series of small attacks on the German line to prepare for another large-scale attack. Although the British suffered heavy casualties at the Battle of the Somme, the Germans had lost around 450,000 men during the battle. The German general Ludendorff said, ?We had heavy losses in men and materials. As a result of the Somme we were completely exhausted on the Western Front.? The Somme provided the French at Verdun with relief, so that they could launch a counter attack by December 1916 as the Germans had been pushed back. Althoug there was a tremendous amount of casualties, Britain and its allies won the won and their perseverance and the ability to rise to every challenge they faced shown that they were able to adapt ?themselves to constant change with astonishing success.? Many weapons were introduced throughout the war, such as machiene guns, artillery, poison gas and tanks which shows that they ?absorbed weapon after weapon into their battle-systems?. However, many people forget that although the generals didn?t actively particpate in the war as they were behind the Front Line, their crucial decisions and adaptations to new challenges, weapons and tactics meant that Britain were able to win the war, ?But no one cares to make a legend out of that?. This source was written by John Terraine, a British military historian and TV screenwritter, writing in his study of the Battle of the Somme, ?The Smoke and the Fire?, written in 1980, so it is a secondary source with the benefit of hindsight. He is best known as the lead screenwriter for the 1960s BBC documentary ?The Great War? and for his defense of British General Haig. He published 16 books, most of them dealing with aspects of European wars of the 20th century. Terraine was the founder and president of the Western Front Association from 1980, when he wrote the book, to 1997. ...read more.