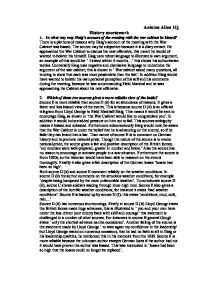 Antoine Allen 11j History coursework 1. In what way may Haig's account of the meeting with the war cabinet be biased? There is a plethora of reasons why Haig's account of the meeting with the War Cabinet was biased. The source may be subjective because it is a diary extract. He approached the War Cabinet to discuss his new offensive, this meant he would of wanted to bolster his himself. Haig uses robust language to illustrate is own argument, an example of this would be ' I stated within 6 months...' this shows his authoritarian tactics. Conversely Haig uses negative and dismissive language to undermine the argument of the war cabinet; this is shown in ' War cabinet asked many questions, all tending to show that each was more pessimistic than the last'. In addition Haig would have wanted to bolster his own personal perception of his self and his comments during the meeting, because he was a commanding Field Marshal and he was approaching the Cabinet about his new offensive. 2. Which of these two sources gives a more reliable view of the battle? Source E is more reliable than source D (ii) for an abundance of reasons. It gives a fairer and less biased view of the events. This is because source D (ii) is an official telegram from Lloyd George to Field Marshall Haig. ...read more.

this was a hopeful prediction, as it left men stranded in front of enemy fire trying to wade their ways through uncut barbed wire. This was why his plan of a mass infantry attack often failed. General Hackett wrote of the Battle of Loos"...Then twelve battalions, 10,000 men, on a clear morning, in columns, advanced up a gentle slope towards the enemy's trenches. The wire behind which these lay was still unbroken. The British advance met with a storm of machine gun fire. Incredulous, ... the Germans mowed the attackers down, until, three and half-hours later, the remnants staggered away... having lost 385 officers and 7,681 men. The Germans as they watched the survivors leave, stopped firing in compassion. Their casualties at the same time had been nil." Due to the meticulous nature of his plans, there were no provisions ready for such mistakes. So this gave the enemy time to regroup. Haig avoided taking the advice of his generals. Even his most aggressive general, general Gough advised him not to persist his current offensive, but did not heed his advice, source B states 'I informed the commanding in chief that success was not possible'. In fact Haig often humiliated his generals in front of their troops. This 'brow beating' taken from a historian would have diminished the confidence of the troops in their command and the belittling of the generals would reduce their confidence. ...read more.

This is contradicted by the personal memoirs that Lloyd George had saying he had no confidence in Haig's leadership, he says Passchendaele was a 'senseless campaign'. The memoirs can be trusted more than the letter because they are personal and he would not lie to himself. This is why Source D (ii) does not help us with this debate. Source E supports Lloyd George's statement that Passchendaele was a senseless campaign. This is a secondary source by an unknown officer. Than nature of source E is to comment on German history and to promote national pride. Though the nature of the source is to evoke national pride, the source gives a fair and positive description of the British forces; 'our enemies were well-prepared, greater in number and brave.' Also the source has no reason to encourage or animate people in a war situation. Furthermore the source is from 1920s; thus the historian would have been able to research on the events thoroughly. Finally it also gives a fair description of the German loses 'losses had been so high'. It supports Lloyd George's statement because the source comments on the 'bad weather' its back up by source D (I), 'conditions, mud, cold, rain and lack of shelter'. In conclusion, every source except source D (II) supports the statement made by Lloyd George that Passchendaele was a 'senseless campaign'. For a plethora of reasons: Haig ordered advances in terrible weather conditions; he made minimal gains in terms of territory; lastly this was the reason for abundance in loss in human life. ...read more.