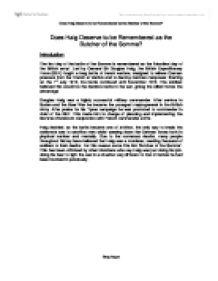 Haig, Butcher of the Somme

Does Haig Deserve to be Remembered as the Butcher of the Somme? Introduction The first day of the battle of the Somme is remembered as the 'bloodiest day of the British army'. Led by General Sir Douglas Haig, the British Expeditionary Force (BEF) fought a long battle of trench warfare, designed to relieve German pressure from the French at Verdun and to destroy German manpower. Starting on the 1st July 1916, the battle continued until November 1916. The soldiers believed this would be the decisive battle in the war, giving the Allied forces the advantage. Douglas Haig was a highly successful military commander. After service in Sudan and the Boer War he became the youngest major-general in the British Army. After praise for his Ypres campaign he was promoted to commander in chief of the BEF. This made him in charge of planning and implementing the Somme offensive in conjunction with French commander Joffre. Haig decided, as the battle became one of attrition, the only way to break the stalemate was to sacrifice men whilst wearing down the German forces both in physical number and mentally. Due to the numerous deaths, many people throughout history have believed that Haig was a murderer, sending thousand of soldiers to their deaths. For this reason some title him 'Butcher of the Somme'. This has been criticised by other historians who say Haig was just doing his job, doing his best to fight the war in a situation very different to that of battles he had been involved in previously. ...read more.

Another major influence on the British public would have been the newspaper cartoonists. This would have been seen by a vast percentage of the population, at a time when TV was not invented. To keep the public interested they would usually mock somebody, in the case of Source 6, Haig for keeping out of the fighting, behind the lines. I find this argument to be fair; Haig's fatally flawed tactics certainly brought many people to their deaths. However, Haig felt this would be the only way to win the war for the Allied forces. However, John Laffin suggests it was not just Haig, but the 'other British generals' must be blamed' as well. This seems to me that giving Haig alone the title of 'Butcher' is slightly unfair. Interpretation 2 - Haig was not a Butcher Those who believe Haig was not a butcher cite the opinion of the British public immediately after the war. Source 14, a newspaper cutting, shows a picture of crowds thronging around Haig's car on his return from France, captioned 'A spontaneous welcome'. Whilst the media was probably censored by the government the photo's meaning is very clear and could not easily be faked. This means it is a reliable source. The crowd's appreciative attitude towards Haig's campaigns led to him being granted �100,000, a sum worth far more at the time (1919) which shows Haig was not viewed as a butcher by the British public. ...read more.

It is also true that Haig warned of the heavy losses and the government at the time did not raise any concerns regarding this. Haig also coped with constant change, certainly no worse than any other general during the First World War. Furthermore the battle was a success and the Germans were disappointed with the outcome. Clearly different people have come up with some very different conclusions. The 'Haig is a Butcher' argument is very emotive and gave many people someone to blame for their suffering and bitterness regarding the war. It would have carried very easily through the media; in contrast to the far less headline grabbing story that Haig was merely doing as well as he could. When the various sources I looked at were written, perhaps less information and an only biased arguments were available. Other writers have paid more attention to some evidence than to other evidence. This meant the source writers came up with different opinions of Haig. I find it very hard to tell what the truth about Haig is. The various sources I have seen contradict each other, sometimes within the same interpretation. However, my overall opinion is that Haig was not a butcher. This is because whilst he made many mistakes he did want casualties; he did his job as well as he knew how given the constant major technological advances in warfare that were taking place. The term butcher implies Haig intentionally slaughtered soldiers and there is no evidence to support that. Does Haig Deserve to be Remembered as the Butcher of the Somme? Greg Auger ...read more.