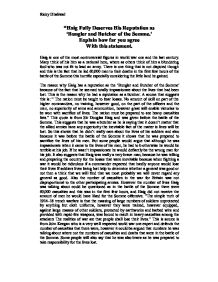 Haig Fully Deserves His Reputation as 'Bungler and Butcher of the Somme.'Discuss

"Haig Fully Deserves His Reputation as 'Bungler and Butcher of the Somme.' Explain how far you agree With this statement. Haig is one of the most controversial figures in world war one and the last century. Many think of his him as a national hero, where as others think of him a blundering fool who was not fit to lead an army. There is one thing that is not disputed though and this is the fact that he led 60,000 men to their deaths in the first few hours of the battle of the Somme this horrific especially considering the little land he gained. The reason why Haig has a reputation as the 'Bungler and Butcher of the Somme' because of the fact that he seemed totally impassionate about the lives that had been lost. This is the reason why he had a reputation as a butcher. A source that suggests this is: " The nation must be taught to bear losses. No amount of skill on part of the higher commanders, no training, however good, on the part of the officers and the men, no superiority of arms and ammunition, however great will enable victories to be won with sacrifice of lives. The nation must be prepared to see heavy casualties lists." This quote is from Sir Douglas Haig and was given before the battle of the Somme. This suggests that he was a butcher as he is saying that it doesn't matter that the allied armies have any superiority the inevitable fact of the matter is lives will be lost. ...read more.

But it also could suggest that the information Haig was getting was wrong. This then either suggests that he was a bungler as his sources communication weren't as good as they should have been. This would have been corrected if he was actually on the front line seeing what was happening. But then if he was on the front line it would have been extremely difficult for him to command the western front as a whole because of this he can be viewed as a bungler. It would have taken an extremely skilled commander to be able to take command of a large army spread out across a long distance and be able to command the army from one point of the front. So this suggests that he had incorrect information relayed back to him. Another source that helps support that he was a butcher and a bungler is: "Haig was as stubborn as a donkey and as unthinking as a donkey. The principle that guided him was if he could kill more Germans than the Germans could kill his men, then he would at some time win the war. This is an appalling kind of strategy at all, it's slaughter. The Somme was criminal negligence. He had no chance of a break through but still he men to their deaths." From a book called 'British Butchers and Bunglers of the World War' and it was wrote by John Laffin. ...read more.

"If the battle of the Somme had no great importance in the strategic sense, its consequences nevertheless were great, particularly as regards morale. It gave the Western Powers confidence. Their armies had accomplished an achievement that gave good promise for the future. The confidence if the German troops in victory was no longer as great as before. A great part of the best, most experienced and most reliable officers and men were no longer in their places. This was the more marked as the heavy losses made it necessary to send to the front a great number of young soldiers whose training was poor." This shows that the battle of the Somme was not a total disaster as something was achieved in the battle of the Somme. What was achieved was that the German's most experienced and best troops were killed and had to be replaced by younger more inexperienced troops. Also the morale of the German troops was drastically changed from being high going to low. But I don't think that Haig intended it as much as to gain territory. I think that it was caused as a consequence of Haig trying to capture more territory. Overall I think that it is unfair to label anyone as a 'butcher and bungler' including Haig. Although that death of soldiers is inevitable in war I think that no matter what the number casualties suffered cannot be justified even though some progress was made towards winning the war. Overall I think that Haig was more of a 'Bungler' that anything else. Ricky Dhaliwal ...read more.