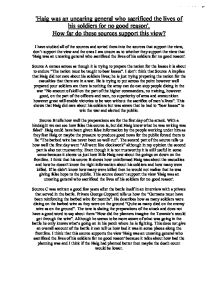 I am unsure as to the category I should put this source in as it has no blatantly obvious clues. The source just insinuates that Haig is a man who likes his alcohol and would make a large sacrifice for such a small thing "Haig is about to make yet another giant effort to moves his drinks cabinet six inches closer to Berlin". The "yet" in this statement is a key point as it shows us that Haig has done something similar to this before. This source is also meant as a humorous one "You mean the moment has finally arrived for us to give Harry Hun a darn good British style thrashing, six of the best, trousers down?" so as you can see Source D is in the unsure category as there is nothing pointing to the statement 'Haig was an uncaring general who sacrificed the lives of his soldiers for no good reason'. Source E is a cartoon published in a magazine in February 1917. This source is also meant as a humorous one. But is infact having a dig at not only Haig but other generals "The absence of a general sir". ...read more.