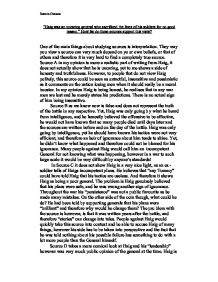 &quot;Haig was an uncaring general who sacrificed the lives of his soldiers for no good reason.&quot; How far do these sources support this view?

"Haig was an uncaring general who sacrificed the lives of his soldiers for no good reason." How far do these sources support this view? One of the main things about studying sources is interpretation. They way you view a source can very much depend on your own beliefs, or that of others and therefore it is very hard to find a completely true source. Source A in my opinion is more a realistic part of writing from Haig, it does not actually show that he is uncaring, yet to me shows a side of honesty and truthfulness. However, to people that do not view Haig politely, this source could be seen as untactful, insensitive and pessimistic as it comments on the nation losing men when it should really be a moral booster. In my opinion Haig is being honest, he realises that in any war men are lost and he merely states his predictions. There is no actual sign of him being insensitive. Source B as we know now is false and does not represent the truth of the battle in any respective. Yet, Haig was only going by what he heard from intelligence, and he honestly believed the offensive to be effective, he would not have known that so many people died until days later and the sources are written before and on the day of the battle. ...read more.

However due to the source being made for comical purposes only it cannot be taken completely seriously, however many people very much against Haig would state the fact that in "Blackadder" he is constantly mocked for his choices made in the war. Although, it cannot be taken 100% seriously. The same could be said for Source E however it was written in 1917, during the war and therefore demonstrates that even then many people were against Haig and his was of leadership. The Source suggests that the General's should be on the frontline, however that suggestion is ludicrous, yet many people still believed it. In my opinion the source is slightly harsh, yet its purpose is against Haig and therefore shows him in a bad light, as does Source D. It is rather biased and therefore is not entirely credible because once again it was made for a comical purpose. Source F was written by a noted historian by the name of Laffin, however he was very much against Haig and his writing is against Haig in every way. He suggests Haig as being a "donkey" and committing "criminal negligence." In my view this is not true, however he is very much against Haig and shows him to be ignorant and incompetent. ...read more.

that Haig was very much a different man than what he once believed, and therefore this reflects Haig in a bad light, and shows that maybe he did sacrifice his men for his own benefits. Source can always be interpreted differently and therefore no one opinion can be formed. Every person has different views on Haig and the way he acted. Some sources are very biased against Haig and clearly believe him to be insensitive, and a slaughterer. Others seem to think that he was a brilliant General and his perseverance was a main point of the allied victory. Interpretation is very important, and in general I think Haig didn't do too much wrong. However I do realise that his offensive at the Somme was a disaster, yet he only went on his intelligence and what people told him and therefore the deaths cannot be blamed on one man. Haig is seen in many different lights, and many believe him to be very different than what he was. The sources show all different view point of Douglas Haig, and therefore show a complete picture of him. He was neither a good or bad General, but a mixture of both with good and bad points in his character. Just like every other human being. Ronnie Gunson ...read more.