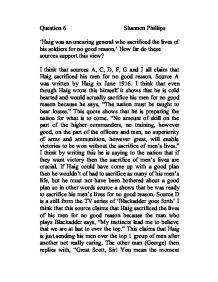 'Haig was an uncaring general who sacrificed the lives of his soldiers for no good reason.' How far do these sources support this view?

Question 6 Shannon Phillips 'Haig was an uncaring general who sacrificed the lives of his soldiers for no good reason.' How far do these sources support this view? I think that sources A, C, D, F, G and J all claim that Haig sacrificed his men for no good reason. Source A was written by Haig in June 1916. I think that even though Haig wrote this himself it shows that he is cold hearted and would actually sacrifice his men for no good reason because he says, "The nation must be taught to bear losses." This quote shows that he is preparing the nation for what is to come. "No amount of skill on the part of the higher commanders, no training, however good, on the part of the officers and men, no superiority of arms and ammunition, however great, will enable victories to be won without the sacrifice of men's lives." I think by writing this he is saying to the nation that if they want victory then the sacrifice of men's lives are crucial. If Haig could have come up with a good plan then he wouldn't of had to sacrifice as many of his men's life, but he must not have been bothered about a good plan so in other words source a shows that he was ready to sacrifice his men's lives for no good reason. ...read more.

"It was clear that there were no gaps in the wire at the time of the attack. The Germans must have been reinforcing the wire for months. It was so thick that daylight could barely be seen through it. How did the planners imagine that Tommies would get through the wire?" this shows that the Germans had made loads of planning but the British mustn't have as the planners would have thought of a 'what if the wire is to thick? Plan'. "any Tommie could have told them that shell fire lifts wire up and drops it down, often in a worse tangle than before." This shows that our men haven't been trained properly or else we wouldn't be using shell fire. This in my eyes shows that Haig sacrificed the lives of his men for no good reason or else he would have given them good training and hired someone to think up of a good plan instead of just sending his men out to kill as many Germans as they can without a plan. Source J is Lloyd George in his memoirs, written in the 1930's. "when the Battle of the Somme was being fought, I travelled the front of Verdun to Ypres. I drove through squadrons of cavalry. ...read more.

Source I was Lloyd George writing to Haig on 21st of September, 1916, after visiting the battlefield. Lloyd George was secretary for war at the time of the Somme. "I can say that the heartening news of the last few days has confirmed our hopes that the tide has now definitely turned in our favour. I congratulate you most warmly on the skill with which your plans were laid." This source also seems like a source that you can trust as it is written by Lloyd George himself. At the end of the source it says 'I congratulate you most warmly......' well in other sources it is showing that Haig didn't make any good plans for the battle. The sources that I have picked that are for Haig show that Haig sacrificed the lives of his men for a good reason, but 1 of the 3 I think is just propaganda. I think that source E doesn't really take a side as it just tells you that the General doesn't attend a real attack, which is slightly more against Haig than for Haig. In my conclusion I think that Haig did sacrifice the live of his men for no good reason because there are more sources against Haig than for Haig and because of the points that I have stated above. Shannon Phillips ...read more.