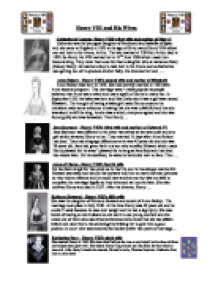 Henry viii and his wives

Henry VIII and His Wives Catherine of Aragon- Henry VIII's first wife and mother of Mary I Catherine was the youngest daughter of Ferdinand and Isabella of Spain and she came to England in 1501 at the age of 16 to marry Henry VII's eldest son and heir to the throne, Arthur. The two married in 1501 but Arthur died in 1502. So Henry the VIII married her in 11th June 1509 which made him become king. They never had a son but had a daughter who is names as Mary (bloody Mary). He wanted a boy to take heir to the throne and as Katherine was getting too old to produce another baby. He divorced her and .... Anne Boleyn - Henry VIII's second wife and mother of Elizabeth Anne Boleyn was born in 1501. ...read more.

As she was a witch, everyone agreed and she was found guilty and was beheaded. Then Henry ... Jane Seymour - Henry VIII's third wife and mother or Edward VI Jane Seymour was different to the other two wives as she was quiet and shy girl which attracted Henry to her. They married 11 days after Anne Boleyn had died. They had a big age difference as he was 45 years old and she was 28 years old. Jane had given birth to a son who is called Edward which made Henry pleased but he wasn't pleased for to long as Jane Seymour had died two weeks later. On his deathbed, he asked to be buried next to Jane. ...read more.

The marriage took place in July 1540. At the time Henry was 49 years old and he couldn't walk because he was over weight and he had a leg injury. She was bored of having an old husband so she went to see young couriers and she knew one of them who was Francis Dereham who knew that she had affairs before and used this to his advantage by bribing her to give him a good position in court. She was executed for adultery after two years of marriage... Katherine Parr - Henry VIII's sixth wife She married Henry in 1543. She was a kind lady as she was a very helpful to his three children and helped them grow well. She bathed Henry's leg wound and was there for him when he was sick. After Henry's death she married Edward's uncle, Thomas Seymour. Katherine Parr died in child birth. ...read more.