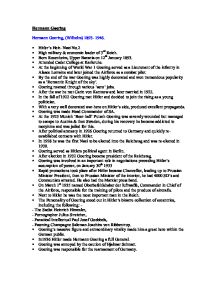 Hermann Goering Hermann Goering, (Wilhelm) 1893- 1946. * Hitler's Heir- Nazi No.2 * High military & economic leader of 3rd Reich. * Born Rosenheim, Upper Bavaria on 12th January 1893. * Attended Cadet College at Karlsruhe. * At the beginning of World War 1 Goering served as a Lieutenant of the infantry in Alsace Lorraine and later joined the Airforce as a combat pilot. * By the end of the war Goering was highly decorated and won tremendous popularity as a 'Romantic Knight of the sky'. * Goering roamed through various 'aero' jobs. * After the war he met Carin von Kantzow and later married in 1922. * In the fall of 1922 Goering met Hitler and decided to join the rising as a young politician. ...read more.

* Goering served as Hitlers political agent in Berlin. * After election in 1932 Goering became president of the Reichstag. * Goering was involved in an important role in negotiations preceding Hitler's assumption of power, on January 30th 1933 * Rapid promotions took place after Hitler became Chancellor, leading up to Prussian Minister President, then to Prussian Minister of the interior, he had 4000 SD's and Communists arrested. He also had the Marxist press band. * On March 1st 1935 named Oberbefehlshaber der luftwaffe, Commander in Chief of the Airforce, responsible for the training of pilots and the produce of aircrafts. * Next to Hitler he was the most important man in the Reich. * The Personality of Goering stood out in Hitler's bizarre collection of eccentrics, including the following: - - The Sadist Heinrich Himmler, - Pornographer Julius Streicher, - Fanatical Intellectual Paul Josef Goebbels, - Fawning Champagne Saleman Joachim von Ribbentrop. ...read more.

* To satisfy Hitler he condemned the persecution Jews and did his best to force them out of German economic life. * On August 30th 1939, Hitler made Goering chairman of the Reich Council for National Defence, he then, the next day designated Goering as his successor in the event that he, Hitler met death in uniform he was going to wear until victory or death. * Goering commanded Blitzkrieg's throughout Poland and France * 19th June 1940 he was made Reich Marshal * Goering was captured by US troops on 9th May 1945 found guilty and sentenced to death in Tribunal in Nuremberg * On October 15th 1946, two hours before he was due to be hanged, he had taken a vial of poison and had died before the sentence could take place. ...read more.