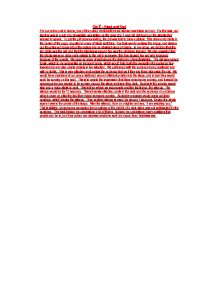 Girl X - Black and Red For our colour unit in drama, one of the colour combinations we studied was black and red. For this task, our teacher was in a role of a physiatrist, was telling us the case of a 7 year old girl found on the streets that refused to speak. To get the girl communicating, the girl was told to draw a picture. She drew a red circle in the center of the page, engulfed in a sea of black scribbles. ...read more.

We used an array of techniques; the first being characterisation. The girl was named Emily, which to me seems like an innocent name, which would help build the sympathy the audience has towards her and also create anxiety in her situation. We performed with the audience being scattered and with no lights. This is very effective as it makes the audience feel as if they are there alongside the girl. We would have members of our group stationed around different positions in the stage, and in turn they would each be running on the spot. ...read more.

Suddenly a scream would come out form nowhere, which breaks the silence. Then another silence is used, for around 7 seconds. During the whole scene I was in the center of the stage. After the silence, I turn on a lighter and say, "I am watching you." This is striking, as someone appearing from nowhere in the middle of a dark stage was not anticipated by the audience. This task helped me understand a lot of things. It made me understand many positions that people can be in, and how colour can express emotions such as: anger, fear, helplessness. ...read more.