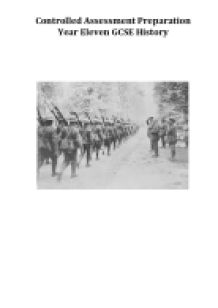 ﻿Controlled Assessment Preparation Year Eleven GCSE History By Bethany Hunnebell August 2012 Keywords: 1. Nationalism - the belief that your country is better than others. 2. Imperialism - the desire to conquer colonies, especially in Africa. 3. Militarism (Arms Race) - the attempt to build up a strong army and navy gave nations the means and will to make war. 4. Alliances ?where people/country?s join together in partnership to fight wars e.g. in 1882, Germany, Austria-Hungary and Italy formed the Triple Alliance. 5. The Weimar Republic- this is the term used to describe the German democratic republic that lasted from 1919 until 1933. 6. Bill of Rights- A statement of the rights of a class of people, in particular 1. Reichstag- the Reichstag which in English translates to the Diet of the Realm was the parliament of Weimar Republic (1918?1933). 1. Article 48 ? allowed the president to rule by decree at times of an emergency and gave the president the right to override the Reichstag and provide leadership "above party". 2. Proportional representation-an electoral system in which the distribution of seats corresponds closely with the proportion of the total votes cast for each party. For example, if a party gained 40% of the total votes, a perfectly proportional system would allow them to gain 40% of the seats. 3. BDM-Bund Deutscher Madel-the German group for girls age 14+. 4. Aryan-a person of European decent (not Jewish) often with blonde hair and blue eyes- the Nazis viewed them as the superior human race. 5. SS- Also known as the Black shirts. A German police/military style organisation created to serve as the personal bodyguards of Adolf Hitler. 6. Holocaust-Known as the mass murder of Jews under the German Nazi regime during the period 1941?45. Real definition is the destruction or slaughter on a mass scale, esp. caused by fire or nuclear war: "a nuclear holocaust". ...read more.

Reasons why Hitler rose to power 1. Hitler was a great speaker, with the power to make people support him. 2. The moderate political parties would not work together, although together they had more support than the Nazis. 3. The depression of 1929 created poverty and unemployment, which made people angry with the Weimar government. People lost confidence in the democratic system and turned towards the extremist political parties such as the Communists and Nazis during the depression. 4. The Nazi storm troopers attacked Hitler's opponents. 5. Goebbels' propaganda campaign was very effective and it won support for the Nazis. The Nazis targeted specific groups of society with different slogans and policies to win their support. 6. Hitler was given power in a seedy political deal by Hindenburg and Papenwho foolishly thought they could control him. 7. German people were still angry about the Treaty of Versailles and supported Hitler because he promised to overturn it. 8. Industrialists gave Hitler money and support. http://www.history.com/this-day-in-history/adolf-hitler-is-named-chancellor-of-germany Methods of controlling Nazi Germany Below are some of the methods used by the Nazis to control every aspect of German life. Censorship Films. Mass media Intimidation S.S. Gestapo. S.A. One Party State Enabling Act. Parties Banned. Trade Unions Propaganda Censorship. Rallies. Parades. Control of media Dictatorship Enabling act Indoctrination Hitler Youth. Control of Education Economic recovery Rearmament. Fall in unemployment Some of the reasons why the Nazis were able to control everyday life in Germany were because of the following: 1. The Nazi party was the only political party in Germany. All other parties were banned. 2. Censorship was rigorously enforced by Dr Goebbels, the Nazi Minister of Propaganda. Germans could read and see only what the Nazis permitted. 3. Young people were forced to use school text books that had been rewritten by the Nazis and boys were encouraged to join the Hitler Youth. 4. The Enabling Act allowed Hitler to pass any law without consulting the Reichstag (or parliament). ...read more.

The chances for survival for Jewish and some non-Jewish adolescents (13-18 years old) were greater, as they could be deployed at forced labour. The fate of Jewish and non-Jewish children can be categorized in the following way: 1) children killed when they arrived in killing; 2) children killed immediately after birth or in institutions; 3) children born in ghettos and camps who survived because prisoners hid them; 4) children, usually over age 12, who were used as labourers and as subjects of medical experiments; and 5) those children killed during reprisal operations or so-called anti-partisan operations. In the ghettos, Jewish children died from starvation and exposure as well as lack of adequate clothing and shelter. The German authorities were indifferent to this mass death because they considered most of the younger ghetto children to be unproductive and hence ?useless eaters.? Because children were generally too young to be deployed at forced labour, German authorities generally selected them, along with the elderly, ill, and disabled, for the first deportations to killing centres, or as the first victims led to mass graves to be shot. Upon arrival at Auschwitz-Birkenau and other killing centres, the camp authorities sent the majority of children directly to the gas chambers. SS and police forces in German-occupied Poland and the occupied Soviet Union shot thousands of children at the edge of mass graves. Sometimes the selection of children to fill the first transports to the killing centres or to provide the first victims of shooting operations resulted from the agonizing and controversial decisions of Jewish council (Judenrat) chairmen. The decision by the Judenrat in Lodz in September 1942 to deport children to the Chelmno killing centre was an example of the tragic choices made by adults when faced with German demands. Janusz Korczak, director of an orphanage in the Warsaw ghetto, however, refused to abandon the children under his care when they were selected for deportation. He accompanied them on the transport to the Treblinka killing centre and into the gas chambers, sharing their fate. http://www.ushmm.org/wlc/en/article.php?ModuleId=10005142 ...read more.