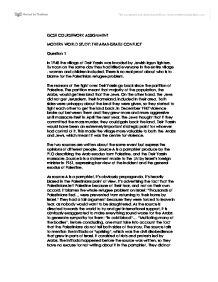 GCSE COURSEWORK ASSIGNMENT MODERN WORLD STUDY: THE ARAB-ISRAELI CONFLICT Question 1 In 1948 the village of Deir Yassin was invaded by Jewish Irgun fighters. By noon on the same day they had killed everyone in the entire village - women and children included. There is no real proof about who is to blame for the Palestinian refugee problem. The reasons of the fight over Deir Yassin go back since the partition of Palestine. The partition meant that majority of the population, the Arabs, would get less land that the Jews. On the other hand, the Jews did not get Jerusalem, their homeland, included in their area. Both sides were unhappy about the land they were given, so they started to fight each other to get the land back. In December 1947 violence broke out between them and they grew more and more aggressive until massacre itself in April the next year. The Jews thought that if they committed the mass murder, they could gain back the land. Deir Yassin would have been an extremely important strategic point for whoever had control of it. This made the village more valuable to both the Arabs and Jews, which meant it was the centre for violence. The two sources are written about the same event but express the opinions of different people. ...read more.

To conclude, the 2 sources are totally different. They differ in almost every way, and each source is extremely biased, the sources are not reliable at all, we can only use them to see individual opinions. Neither of the sources either have proof to support the opinions, for example source B tells us that the massacre was undertaken by people who had nothing to do with the government, but the Israelis have no evidence for this, so we have no reason to believe this. The sources give so diverse facts and opinions, it is impossible to draw conclusions about who is to blame for the refugee problem, we can only have our own opinion. GCSE COURSEWORK ASSIGNMENT MODERN WORLD STUDY: THE ARAB-ISRAELI CONFLICT Question 2 Although sources A-F include a lot of information, it is hard to analyze the sources to make the conclusion of who is to blame for the Palestinian refugee problems. Many of the sources are biased and don't give both sides to the story. The 6 sources give us lots of information concerning the opinions of the different sides, but when it comes to concluding and giving a fair opinion, it's almost impossible. We need to analyze each source for their efficiency, and asses them to find out their purpose and reliability. Source A gives us the Palestinian view of the Arab exodus from Palestine. ...read more.

The source states that if Palestinians settled elsewhere, the whole problem would stop. It is basically a confirmation to source D. This source pretty much proves that the Arabs are causing the refugee problem. The last source, F, is 2 photos. They say that the Arab was born in Jerusalem, but can't go back to live there. The Jew was not born in Palestine, but she can return there any time she wants. The Arab and the Jew can still say exactly the same thing20 years later, as their situations are exactly the same, nothing has changed. The source is defiantly not biased as it has the perspective of a Jew and an Arab. It doesn't explain the cause of the problem, but it tells us that the problem has not been solved yet. To conclude, these sources do not let you come to a conclusion. Source A contradicts source B, and source C contradicts source B. Sources D and E tell us that the Arabs didn't want compensation and acted awkwardly to annoy the UN, which contradicts source A again. With all the sources saying that others are wrong, and the lack of evidence for sources A, B and E, we cannot believe any of them, or come to any sort of agreement about who really is to blame for the refugee problem. We need more evidence and facts to come to a firm conclusion. William Fisher ...read more.