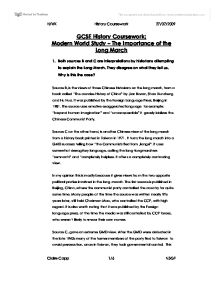 GCSE History Coursework: Modern World Study - The Importance of the Long March 1. Both sources B and C are interpretations by historians attempting to explain the Long March. They disagree on what they tell us. Why is this the case? Source B, is the views of three Chinese historians on the long march, from a book called "The concise History of China" by Jian Bozan, Shao Xunzheng and Hu Hua. It was published by the Foreign Language Press, Beijing in 1981. The source uses emotive exaggerated language for example: "beyond human imagination" and "unconquerable" it grossly idolizes the Chinese Communist Party. Source C on the other hand, is another Chinese view of the long march from a history book printed in Taiwan in 1971. It turns the long march into a GMD success telling how "the Communists fled from Jiangxi". It uses somewhat derrogitory language, calling the long-longmarchers "remnants" and "completely helpless. It offers a completely contrasting view. In my opinion this is mostly because it gives views from the two opposite political parties involved in the long-march. The first source is published in Beijing, China, where the communist party controlled the country for quite some time. ...read more.

The map itself is useful, but more as a graphical representation of the hardships that the long-marchers faced as opposed to telling us how important the long-march was. However, the fact that it was published for use in British Schools almost fifty years after the march itself took place, does help us to gauge its importance. Were it of little or no importance, students in schools thousands of miles away wouldn't be studying it years later. The fact that the map was produced for schools, and that we are studying it today, means it had long-term effects. An indication that an event has high importance. If I were to give it a rating of usefulness out of ten, I would give it an 8OR9/10. Source B, is the views of three Chinese historians on the long march, from a book called "The concise History of China" by Jian Bozan, Shao Xunzheng and Hu Hua. It was published by the Foreign Language Press, Beijing in 1981. The source contains a few key facts but uses much emotive and exaggerated language, to emphasise the importance of the Long March, calling it a "historic mission" and saying "It inspired the whole country." ...read more.

Another indication of the importance, yet again, is the fact that it was published for use in British schools 90 years later. Clearly this is an indication of its importance. Therefore, the source is extremely helpful with the task in hand, I'd give it a 9/10. To conclude, this selection of seven different sources, certainly vary in the amount of usefulness, and the tasks in which they are useful for. There are some sources, which aren't particularly helpful at all, for example source D, primarily because it just isn't useful for gauging importance, it has other uses. I also feel, that the selection might have done better, without the propaganda, since it cannot be trusted, and is therefore almost never helpful. Sources such as the excerpts from various school textbooks, were far more helpful, I feel more sources similar to A & G, would have been beneficial. However, in general I think that the pack is quite useful; certainly several of the sources were extremely helpful. It may have been useful to have a wider selection of sources, more targeted to this specific task. However, I feel the sources provided were adequate. ?? ?? ?? ?? H/WK History Coursework 27/07/2009 Claire Capp 1/6 N5GF ...read more.