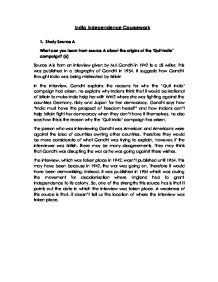 India Independence Coursework 1. Study Source A What can you learn from source A about the origins of the 'Quit India' campaign? (6) Source A is from an interview given by M.K Gandhi in 1942 to a US writer. This was published in a biography of Gandhi in 1954. It suggests how Gandhi thought India was being mistreated by Britain In the interview, Gandhi explains the reasons for why the 'Quit India' campaign had arisen. He explains why Indians think that it would be irrational of Britain to make India help her with WW2 where she was fighting against the countries Germany, Italy and Japan for her democracy. Gandhi says how "India must have the prospect of freedom herself" and how Indians can't help Britain fight her democracy when they don't have it themselves. He also says how this is the reason why the 'Quit India' campaign has arisen. The person who was interviewing Gandhi was American and Americans were against the idea of countries owning other countries. Therefore they would be more considerate of what Gandhi was trying to explain. However, if the interviewer was British, there may be many disagreements. They may think that Gandhi was disrupting the war as he was going against there wishes. The interview, which was taken place in 1942, wasn't published until 1954. This may have been because in 1942, the war was going on. Therefore it would have been demoralising. Instead, it was published in 1954 which was during the movement for decolonisation where England had to grant independence to its colony. So, one of the strengths this source has is that it points out the date in which the interview was taken place. A weakness of this source is that, it doesn't tell us the location of where the interview was taken place. 2. Study sources A, B and C Does the evidence of Source C support the evidence of sources A and B about the reason for opposition to British rule in the 1940s? ...read more.

In the interview, Jinnah viewed the Hindu's very negatively. Since he was the leader of the Muslim League, it was possible for Muslims to be influenced by what he says and would therefore agree with him with the fact that it is better if they had their own separate state. At a conference, Jinnah also added that 'Hindus and Muslims belong to two different religious philosophies, social customs and literature. They neither intermarry, nor dine together and indeed they belong to two different civilizations, which are based on conflict ideas.' In the conference, Jinnah explains the very two differences Muslims and Hindus had. He explained how they couldn't agree on the same thing let alone 'dine' together. This showed that Jinnah truly believed that it was impossible for two complete different communities to 'join together' under a single state. He believed that it would 'lead to a growing discontent and the final destruction of such a state'. On 16 August 1946, Jinnah declared a 'Direct Action' campaign because the League became more determined to form the separate state of 'Pakistan'. Direct Action was declared against Indian National Congress, who rejected Jinnah. It was also declared against the British rule, which Jinnah wanted out of India as did other Indians. However, Gandhi was horrified by Direct Action as it was against his ideas of non-violence. Direct action was as a series of nationwide peaceful demonstration by Muslims. However, as a result of Direct Action, violence had broken out in some areas such as in Calcutta. Source F is a photograph taken in Calcutta. In this source, it shows that police were using tear gas after a Hindu temple had been set on fire. The purpose of the photograph was to show the state India had got to. It suggests how the communal violence was so bad that it even reached a stage where people attempted to destroy a place of worship. ...read more.

Mountbatten had soon became convinced that the partition of India was unavoidable even after Gandhi who had spent so much effort and time to keep India united. Mountbatten presented his plans for when the partition was to take place to both Jinnah and Nehru who accepted it. However, the Congress wasn't ready for it but they had no alternatives and so they agreed to go ahead with the plan. The new country was called 'Pakistan', which meant 'Land of the pure'. Five million Muslims moved from India to Pakistan and 6 million Hindus moved from Pakistan to India. But the movement of so many at the same time, lead to widespread violence and many were killed. Thousands of refugees in trains were slaughtered. Six hundred thousand were killed in Punjab alone. Some people ended up being left behind in a State which they shouldn't have been still living in, e.g. some Muslims were left in India, where the majority were Hindus, and some Hindus were left in Pakistan, where the majority were Muslims. This may have caused a lot of discrimination especially to those who were a minority in the State. In conclusion, I think that Jinnah felt that if a person has nothing in common with another, they would feel it is best to avoid them because of the differences. This is probably why Jinnah wanted a separate state for Muslims in India, but Congress and the Government was against this idea. When violence had started between the two religions, Muslims and Hindus, it seemed by the government that the only other way to stop the violence was by a partition, especially later on when Sikhs had joined in, and the violence became worse. Therefore it was necessary for the partition to take place as there was no other alternative. However, Gandhi's peaceful method of stopping the violence in some areas had worked. I think that because Gandhi alone was able to stop the violence in some cities, together, the government could've also tried to stop it. This way, the partition in India could've been avoided. ?? ?? ?? ?? ...read more.