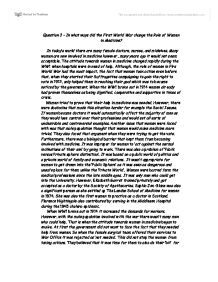 Question 3 – In what ways did the First World War change the Role of Women in Medicine?

In today’s world there are many female doctors, nurses, and midwives. Many women are now involved in medicine however, many years ago it would not seem acceptable. The attitude towards women in medicine changed rapidly during the WW1 when hospitals were in need of help. Although, the role of women in Firs World War had the most impact, the fact that women took action even before that, when they started their Suffragettes campaigning to gain the right to vote in 1912, only helped them in reaching their goal which was to become noticed by the government. When the WW1 broke out in 1914 women already had proven themselves as being dignified, cooperative and supportive in times of crisis.

Women tried to prove that their help in medicine was needed. However, there were obstacles that made this situation harder for example the Social Issues. If women became doctors it would automatically affect the majority of men as they would lose control over their professions and would set all sorts of undesirable and controversial examples. Another issue that women were faced with was that male population thought that women would make medicine more trivial. They also faced that argument when they were trying to get the vote. Furthermore, there was a biological barrier that kept them from becoming involved with medicine. It was improper for women to ‘act against the normal inclinations of their sex’ by going to work. There was also a problem of ‘Public versus Private sphere distinction’. It was based on a public world of politics and a private world of family and economic relations. It wasn’t appropriate for women to get drawn into the ‘Public Sphere’ as it was seen as dangerous and unsafe place for them unlike the ‘Private World’. Women were barred form the medical professions since the late middle ages. It was only men who could get into the University. However, Elizabeth Garret trained privately and got accepted as a doctor by the Society of Apothecaries. Sophia Jex-Blake was also a significant person as she settled up The London School of Medicine for women in 1874. She was also the first women to practice as a doctor in Scotland. Florence Nightingale also contributed by serving in the Middlesex Hospital during the 1845 cholera epidemic.

When WW1 broke out in 1914 it increased the demands for workers. However, with the male population involved with the war there wasn’t many men who could help. That is when the attitude towards women in medicine began to evolve. At first the government did not want to face the fact that they needed help from women. So when the female surgical team offered their services to War Office it was rejected as ‘not needed’. This did not stop the women from taking actions. They believed that it was time for them to also do their ‘bit’ for the War Effort. So they crated ‘The First Aid Nursing Yeomanry’ (FANY). They had a clear policy of leaving tasks of nursing to other groups of women. They provided transport taking risks as ambulance drivers and despatch drivers.

Soon after that attitudes towards women in the ‘Public Sphere’ also changed. The male population realised that women are capable, suitable, and diligent and that they would do an incredible job in politics. So for women the acceptance to the Public world rose. The role of Suffragist and Suffragettes both fighting to get the vote, using either violent or sensible methods, proved to the government that women are determinate to get what they want, and they won’t give up on anything. So along with the changing attitude towards letting women getting the vote came, the change of attitude towards women in medicine. There were also other influences such as the shortage of doctors in Britain. Many were asking themselves if the country could actually to afford excluding women. Eventually in 1876, the Parliament passed an Act to remove restrictions on granting medical qualifications on the grounds of sex. Other influences were The Boer War. It identified how atrocious the medicinal conditions were. It also showed that the Government didn’t have as much power to deal with its society’s unhealthy population. That is when women decided to contribute as they were needed in this field.

In conclusion, there were various ways in which WW1 change the Role of Women in Medicine. If it wasn’t for the certain individuals the world medicine might have never evolved. Women showed a great deal of courage and they did not give up which proved to the Government that by letting them go into the world of Public Sphere they are not going to let them down. The First World War brought many new improvements along with it as well as many new reforms which increased the role played by women in the society. Elizabeth Garret, Sophia Jex-Blake and Florence Nightingale were all a great role models for those women who decided to take some actions, and as well as them they had succeeded.