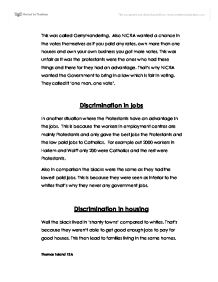 This was called Gerrymandering. Also NICRA wanted a chance in the votes themselves as if you paid any rates, own more than one houses and own your own business you got more votes. This was unfair as it was the protestants were the ones who had these things and there for they had an advantage. That's why NICRA wanted the Government to bring in a law which is fair in voting. They called it 'one man, one vote'. Discrimination in jobs In another situation where the Protestants have an advantage in the jobs. This is because the workers in employment centres are mainly Protestants and only gave the best jobs the Protestants and the low paid jobs to Catholics. For example out 2000 workers in Harlem and Wolff only 200 were Catholics and the rest were Protestants. Also in comparison the blacks were the same as they had the lowest paid jobs. This is because they were seen as inferior to the whites that's why they never any government jobs. Discrimination in housing Well the black lived in 'shanty towns' compared to whites. That's because they weren't able to get good enough jobs to pay for good houses. ...read more.

They had gain lots of support mostly from the church and the media. They won their main case in 1954 when they declared that all blacks and whites must go to the same school. This was called for integration in all schools. Then whenever this came through schools rejected to it just like Little Rock. They stood outside the school and didn't let nine black boys and girls go into the school. They spat on them threatened them and swore at them to keep them out. But them the president sent 500 Federal troops in to escort the black kids into school and maintain the mob. They had also ended the segregation in all public places. This was because they were treated as second class citizens by the whites. This was unlike Northern Ireland as they weren't segregated against. But they faced many obstacles. Such as sitting in separate section in restaurants, cafes, cinemas, public transports and parks. But they had to use different water fountains and swimming pools. But the thing which sparked of the civil rights movement was a woman called Rosa Parks. She had sat on a white section on a bus because all the black seats were taken up and she was tired. ...read more.

They were stopped by the police at a barricade. But the protesters stayed at the barricade and finally the march was passed and they marched without an incident. But also while they were protesting in Tyrone they had a sit in at the house which was giving to the woman. This is because a local mp spuatted in the house. This is the same method the blacks used in the USA. Such as the protest under taken by black and white kids at restaurants and luch counters. They sat at opposite colours section and refused to move. This was a peaceful protest but the whites were in anger as there were scaring away customers. Difference in Methods NICRA got all of there methods from the black civil rights movement. But the Americans had a greater range of methods. Such as th court callenges to the Supreme Court. Also boycotts in Montgomery which was done becauseof Rosa Parks and sparked the civil rights. Then also Freedom Rides, just like the rides across Alabama to gain votes but the KKK tried to stop them and kill them. These all didn't take place in Northern Ireland because segregation didn't take place there. So therefore it was not a viable option. ?? ?? ?? ?? Thomas Toland 12A ...read more.