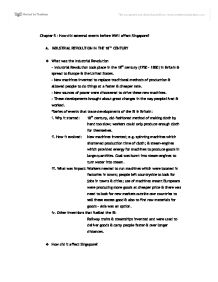 Chapter 5 - How did external events before WWII affect Singapore? A. INDUSTRIAL REVOLUTION IN THE 18TH CENTURY * What was the Industrial Revolution - Industrial Revolution took place in the 18th century (1750 - 1850) in Britain & spread to Europe & the United States. - New machines invented to replace traditional methods of production & allowed people to do things at a faster & cheaper rate. - New sources of power were discovered to drive these new machines. - These developments brought about great changes in the way people lived & worked. *Series of events that trace developments of the IR in Britain: i. Why it started: 18th century, old-fashioned method of making cloth by hand too slow; workers could only produce enough cloth for themselves. ii. How it evolved: New machines invented; e.g. spinning machines which shortened production time of cloth; & steam-engines which provided energy for machines to produce goods in large quantities. Coal was burnt into steam-engines to turn water into steam. iii. What was impact: Workers needed to run machines which were located in factories in towns; people left countryside to look for jobs in towns & cities; use of machines meant Europeans were producing more goods at cheaper price & there was need to look for new markets outside own countries to sell these excess good & also to find raw materials for goods - Asia was an option. ...read more.

- In 1900, it was renamed Keppel Harbour - New Harbour had deep waters allowing sailing ships & steamships to sail right up to the harbour - The 2 smaller islands sheltered the New Harbour from strong winds & big waves - In 1912, the govt set up SG Harbour Board to make new improvements to the port - New wharves, docks, storehouses & machine shops were built - Modern machinery such as forklifts, cranes & tractors used for loading & unloading of goods - Railway system set up to link port to other parts of Malaya - Improvements provided better & faster services in handling goods from ships which called at the port - As volume of goods & number of ships coming into SG Harbour increased, SG became one of busiest ports in Asia * How WWI affected SG i. War in Europe - Countries in Europe divided themselves into 2 opposing groups in 1914 - Germany, Austria-Hungary & Ottoman Empire belonged to one group called the Central Powers - Britain, France, Italy & Russia formed another group called the Allied Powers - Situation in Europe was very tense & any spark would have torched a war - So when Archduke of Austria-Hungary, Franz Ferdinand was murdered in 1914, European countries took sides in a war that erupted into World War I with the Central Powers fighting the Allies ii. ...read more.

goods - As American companies no longer making profits, workers were laid off or workers' wages were cut - The Great Depression was not confined to America; it affected other countries that traded with America, including SG - It was only in 1934 that business conditions in America & other countries improved & exports from SG began to increase again (Effects on Singapore) - SG's economy depended largely on overseas trade & it was affected as demand for certain commodities including tin & rubber dropped - Many companies in SG suffered losses. To cut costs, companies retrenched workers. Many companies also went bankrupt - Hardship & unemployment was rife - Even govt had to cut down on number of workers & reduce pay of remaining workers - Unemployed had to depend on friends or relatives or return to their homeland when their relatives could no longer support them - To try to improve situation, govt passed a law in 1930 to impose quota on number of immigrants coming into SG. Number of Chinese immigrants dropped from 242000 in 1930 to less than 28000 in 1933 - Govt also sent large number of unemployed Chinese & Indians back to their homelands *Questions to think about: i. How did the Industrial Revolution affect Singapore? ii. Why was there a need to build a New Harbour & what are the new facilities in the New Harbour? ...read more.