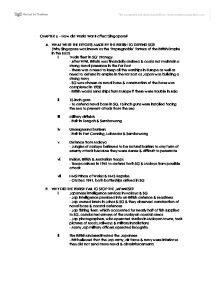 CHAPTER 6 - How did World War II affect Singapore? A. WHAT WERE THE EFFORTS MADE BY THE BRITISH TO DEFEND SG? (Why Singapore was known as the 'impregnable' fortress of the British Empire in the East) i. 'Main fleet in SG' strategy - After WWI, Britain was financially drained & could not maintain a strong naval presence in the Far East - There was a need to keep all the warships in Europe as well as need to defend its empire in the Far East as Japan was building a strong navy - SG was chosen as naval base & construction of the base was completed in 1938 - British would send ships from Europe if there were trouble in Asia ii. 15-inch guns - To defend naval base in SG, 15-inch guns were installed facing the sea to prevent attack from the sea iii. Military airfields - Built in Tengah & Sembawang iv. Underground bunkers - Built in Fort Canning, Labrador & Sembawang v. Defence from Malaya - Jungles of Malaya believed to be natural barriers to any form of enemy attack because they were dense & difficult to penetrate vi. Indian, British & Australian troops - Troops arrived in 1941 to defend both SG & Malaya from possible attack vii. HMS Prince of Wales & HMS Repulse - On Dec 1941, both battleships arrived in SG B. WHY DID THE BRITISH FAIL TO STOP THE JAPANESE? i. ...read more.

- Chinese suffered most among the races - Chinese perceived as threat to Jap rule - Jap Imperial Army hated Chinese because of war they fought in China where Jap met with strong resistance - Before the outbreak of war, Chinese community in SG led by tycoon Tan Kah Kee, called for boycott of Jap goods & contributed funds to anti-Jap war affort in China - Some even returned to China to join fight against Jap - Jap started mass screening (Sook Ching) with intention of wiping out anti-Jap elements - All men between age 18-50 were required to report at the mass screening centres such as the YMCA building at Stamford Road & the Central Police Station at South Bridge Road - They were questioned by the Jap and at some times, local informers wearing hoods would point out certain people as anti-Japanese. These people were taken in lorries to Changi & other beaches on the east coast where they were gunned down - Others received the 'examined' stamp from Jap & were allowed to go home - Chinese were forced to contribute $50 million towards Jap's war efforts (PROPAGANDA) - There were propaganda campaigns carried out by Jap to influence minds of people in SG so that they were loyal to the Jap - Straits Times was renamed Syonan Sinbun - Jap aimed to remove western influence & promote Jap culture & values to people in SG (Jap spirit also known as 'Nippon Seishin') ...read more.

services - An island-wide campaign was launched in OCT 1945 - Free medical services provided at medical centres set up all over island - Vaccinations against infectious diseases such as tuberculosis were available - War destroyed many houses, leaving thousands homeless - Rents became very high as a result of shortage of houses - Those who could not afford high rents live in overcrowded squatters or cubicles - Lack of housing - A law was passed on rent control to stop landlords from raising the house rents & forcing tenants out - GOVT constructed some flats to help alleviate the problem of housing shortage Shortage of food - British cleared the harbour by removing sunken ships & explosives that had been laid in the sea by the Japanese so that ships could enter the port - Wharves were repaired & new warehouses were built to store commodities that were brought into the port - Food rationing was introduced - People's Restaurants were opened to sell food at reasonable prices - Food supplies slowly increased when SG's entrepot trade resumed Unemployment BMA referred unemployed people to the Labour Exchange in Havelock Road which was tasked to match the needs of employers to the skills of the unemployed *Questions for you to attempt: - Why was Singapore known as the 'impregnable fortress'? - If Singapore was indeed an 'impregnable fortress', why was the British unable to stop the Japanese from taking over Singapore? ...read more.