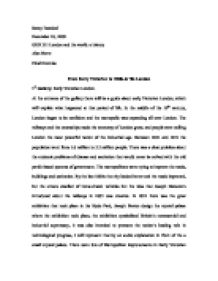 History of London - planning a series of museum exhibits to show London from Early Victorian to 1960s &amp; 70s.

Ramy Tawakol December 18, 2009 GED 311 London and the world: a history Alan Hertz Final Exercise From Early Victorian to 1960s & 70s London 1st Gallery: Early Victorian London. At the entrance of the gallery there will be a guide about early Victorian London, which will explain what happened at that period of life. In the middle of the 19th century, London began to be confident and the metropolis was expanding all over London. The railways and the steamships made the economy of London grow, and people were calling London the most powerful nation of the industrial age. Between 1831 and 1871 the population went from 1.6 million to 3.2 million people. There was a clear problem about the endemic problems of disease and sanitation that would never be solved with the old parish-based systems of government. The metropolitans were trying to improve the roads, buildings and sanitation. By the late 1830s the city looked better and the roads improved, but the streets smelled of horse-drawn vehicles but the idea that Joseph Hansom's introduced about the railways in 1835 was creative. In 1851 there was the great exhibition that took place in the Hyde Park, Joseph Paxton design the crystal palace where the exhibition took place, the exhibition symbolized Britain's commercial and industrial supremacy, it was also intended to promote the nation's leading role in technological progress, I will represent that by an audio explanation in front of the a small crystal palace. There were lots of Metropolitan improvements in Early Victorian age, one of the most important road improvement was the Victoria, Albert, and Chelsea embankments which took place between 1868 and 1874. ...read more.

The first trial was in 1878 along the Victorian Embankment. London underground became electrical in 1890s and it was the first electrical underground in the world. London at world I, the war made London unstable, the aerial bombs and anti-alien made the people loose there self-confidence and everyone was scared. There was around 40,000 Germans working in London and they were living with the British people and working together but the war made them enemies. The war made new industries like making aircraft engines and there was a line of producing high explosive TNT. This will be video that will be displayed on screen and explains what happened to London before and after the War. 4th Gallery: Interwar London At the entrance of the gallery there will be a guide about Interwar London, which will explain what happened at that period of life. After the World War I London changed and started to the age of machines and modernity. The city became more hygienic and better than before which made all the citizens pleased. London started to double up and became twice as big with its roads and railways. The population increased to 8.6 million by 1939. At that period of time Londoners were connected by an automatic telephone system. London became to be modern by providing phone booths and the underground. London became a democratic city not like other European cities by using bolshevism and Fascism. As you enter the gallery there is a small market that shows the Wembley market in 1924. A written explanation of the Empire redefinition after the market; in 1926 there was a law that any product has to be labeled if it's made in Britain or any other foreign country, at that time ...read more.

ran this. Slum Clearance & Home Ownership was one of the most important topics at that time, London needed more than 500,000 new houses for the citizens in the next year so every family has a house. In 1961 21% of the houses were local authority-owned, by 1981 the proportion had risen to 46%, and 400 more buildings had appeared around London. Between 1959 and 1974 the industry had collapsed and 38% of the jobs in London disappeared. In 1960s some gangs appeared and most of them are businessmen gangs; the most known gang was the gang of the Kray twins and the Richardson brothers. By providing a map that shows the places were the gangsters used to go will show the audience were every gang was located, it shows how each gang had it's own area. There was also a lot of old-fashioned armed robbery for money, which seemed innocent compared to the gangsters like the Krays and Richardsons. I will provide the public with pictures that shows the strikes, protests, and demonstrations. The first strike was in 1976 by the workers of the Grunwick Photographic Film processing laboratories, which was located in Willesden because of the poor pay and the working conditions. Blacks were using the street protest because it was the only way to be noticed politically. The streets were also a place for the right-wing National Front to show their power in 1977. The first gay pride was in1971 and also the women were demanding equal pay for women and wages for housework. I will provide pictures of these strikes and protest in the gallery and under each picture there will be a written explanation of the event and when it happened. ...read more.