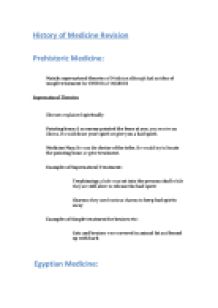 ﻿History of Medicine Revision Prehistoric Medicine: 1. Mainly supernatural theories of Medicine although had an idea of simple treatment for EVERYDAY INJURIES[a] Supernatural Theories 1. Illnesses explained spiritually 1. Pointing bone[b]: if an enemy pointed the bone at you, you receive an illness. It would draw your spirit or give you a bad spirit. 1. Medicine Man: He was the doctor of the tribe. He would try to locate the pointing bone, or give treatment. 1. Examples of Supernatural Treatment: 1. Trephinning: a hole was cut into the persons skull while they are still alive to release the bad spirit 1. Charms: they used various charms to keep bad spirits away 1. Examples of Simple treatment for bruises etc: 1. Cuts and bruises were covered in animal fat and bound up with bark Egyptian Medicine: They had supernatural and natural theories of medicine unlike the Prehistoric who just had supernatural but had an idea of simple treatment for everyday illnesses. Supernatural: Thoth: he was an Egyptian God who they believed gave physicians the skill to cure Sekmet: he was an Egyptian God who was thought to cure and cause disease Examples of Supernatural Medicine: 1. They had spells and magic potions (i.e. Papyrus Berlin) 1. They also had charms to ward off evil spirits such as Tawaret[c], the goddess of childbirth Natural: 1. Doctors examined patients carefully (i.e. examination, diagnosis and treatment) 1. They knew about the importance of the blood, the heart and the pulse 1. They had an understanding of the anatomy through embalming[d] BUT, their religion stopped them from dissecting the main internal organs 1. Natural THEORY OF DISEASE: Blocked Channels Theory- this stated that the body was full of channels like the Irrigation system on the River Nile. They knew that blood passed into vessels in the body through embalming, but thought that if one of these vessels (channels) ...read more.

25 were vaccinated then given the deadly anthrax germs = did NOT DIE 2. 25 were just given the deadly anthrax germs= DIED 3. 10 were used as a control in the experiment= stayed the same because they were a control ? Vaccine Created Rabies[ap], 1885: 1. Pasteur carried out a series of injections on rabbits spines that had been drying for 14 days and used the process of attenuation to get a gradual increase of the strength of germs which would lead to immunity BUT, Pasteur was unsure 1. Chance happening? Pasteur?s team got lucky when a young boy called Joseph Meister who had been bitten by a dog needed treating. ? Pasteur gave him a series of injections and he did NOT DIE from rabies ? Vaccine created Discovery of Penicillin (the World?s First anti-biotic) 1. 3 individuals helped develop penicillin: 1. Ernst Chain (a Jewish refugee and a key part of Florey?s research team) 2. Howard Florey (head of the research team) 3. Alexander Fleming (worked in a military hospital in Boulogne) Stage 1: Flemings ?Discovery?[aq]: 1. He did NOT discover/invent penicillin as it is a natural substance (i.e. mould). 1. 1914: Fleming spent time working in a military hospital in Boulogne [ar]where he was frustrated that antiseptics such as carbolic acid could not stop infection in deep wounds 1. 1928: he made a chance discovery of penicillin in his lab BUT he could NOT ISOLATE the germ-killing substance in the mould 1. 1929: he published an article [as]about how mould can be used to get rid of unwanted laboratory germs BUT failed to recognise its wider use in saving lives! Flemings Chance Discovery in 1928[at]: 1. The culture dish became contaminated with a rare mould while he was away 1. He strangely did NOT incubate this culture dish unlike others 1. The culture dish was left UNDISTURBED for two weeks in his lab 1. ...read more.

Arun Thind [ay]However, (see above page) Fleming had been doing medical research before and so it was not completely by chance he indentified the germ-killing mould (penicllin) Arun Thind [az]This was in the 19th Century Arun Thind [ba]Drugs given to the patient to make the patient pain-free. Arun Thind [bb]Nitrous oxide is laughing gas. It had been discovered before Horace wells by a man called Humphrey Davey but this was IGNORED by the medical profession Arun Thind [bc]Discovery of Ether involves 3 People: John Warren (the Head of Boston Hospital), William Morton (an American Doctor) and the patient to whom they removed the tumor from. Arun Thind [bd]Chloroform was also popular due to the Royal Seal of Approval when Queen Victoria used chloroform during her childbirth ? it became socially acceptable Arun Thind [be]This is the MOST IMPORTANT factor Arun Thind [bf]REMEMBER- 4 things to state! Arun Thind [bg]Because of Queen Victoria?s use chloroform was by far the most popular anaesthetic until 1900 where people discovered it damaged the liver. ? Surgeons used Ether again. Arun Thind [bh]I.e. Equipment was NOT sterilised and Pasteur?s germ theory had not been discovered until 1864 so people had no idea of cleanliness. Arun Thind [bi]? There was a NEED factor for the development of Antiseptics as many people were dying from infection after the operation Arun Thind [bj]I THINK- this was in 1867 Arun Thind [bk]He discovered a connection between the carbolic acid used to stop smell in sewers and to be used in operating theatres to prevent infection. BUT, don?t get confused, he later made the acid into a spray called carbolic spray! Arun Thind [bl]This is the MOST IMPORTANT FACTOR! Arun Thind [bm]Involved 2 people: Ernst Bergmann and William Halsted. Arun Thind [bn]Until John snows report in 1854 that proved cholera was water born Arun Thind [bo]Involves 2 people: William Farr and Edwin Chadwick. Arun Thind [bp]It was brought about by statistics which proved that poor living conditions were linked to disease! Arun Thind [bq]DON?T GET CONFUSED WITH EDWIN CHADWICKS report which was published in 1842! Arun Thind ...read more.