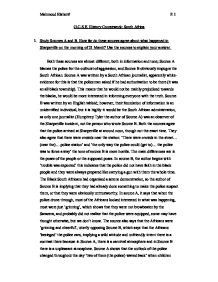 G.C.S.E. History Coursework: South Africa 1. Study Sources A and B. How far do these sources agree about what happened in Sharpeville on the morning of 21 March? Use the sources to explain your answer. Both these sources are almost different, both in information and tone; Source A blames the police for the outburst of aggression, and Source B obviously impugns the South African. Source A was written by a South African journalist, apparently white- evidence for this is that the policeman asked if he had authorization to be there (it was an all black township). This means that he would not be mainly prejudiced towards the blacks, he would be more interested in informing everyone with the truth. Source B was written by an English tabloid; however, their foundation of information is an unidentified individual, but it is highly it would be the South African administration, as only one journalist (Humphrey Tyler the author of Source A) was an observer of the Sharpeville incident, not the person who wrote Source B. Both the sources agree that the police arrived at Sharpeville at around noon, though not the exact time. They also agree that there were crowds near the station: 'There were crowds in the street... (near the)... police station' and 'the only way the police could (get to)... the police was to force a way' the tone of source B is more hostile. ...read more.

Both of the photographs Sources support Source A, and we have evidence that Source B is wrong in mostly all of the points but some of the evidence supports Source B. However they cannot prove everything, as it is a photograph of one particular moment in time; there is also the possibility of photographs being staged. If they had more photographs it may have given us a better answer. In my conclusion, therefore the evidence given by Source C and D is not conclusive; it can prove neither Source A nor B to be right or wrong. Even though most of the points occur in Source A, because of the fact that it captures a moment and it is not continuous, as are Source A and Source B, but still this supports most of Source A, but we don't have enough evidence to fully justify or prove which source is right or wrong as I mentioned before. 3. Study Sources E and F. How reliable is the Source as evidence of what happened at Sharpeville? Use the sources to explain your answer. Source F agrees mainly with Source E, because the other sources are written about the build up to the massacre, not the actual event, and disagree on details. Source E does not say how many protesters were present, but Source F does show the government would try to justify their actions any means necessary, and therefore are giving false and overdramatic ...read more.

A photograph is visual evidence, and this shows us part of the truth of what happened in Sharpeville, rather than having to search for information- however, a photograph captures only one moment in time if we had more photographs at different times then it would help us and give us more reliable information, whereas an author has time to reflect on the day's events, and also incorporate outside factors, such as governments and police statements. The photograph is extremely dramatic, and indicates that the government statement in Source F (' the government claim that the police station was besieged by 20,000 Africans') this was also mentioned in Source B, which make the government source untrue, as we can see how many people are in it. We can also see that the police are holding (and probably firing) semi-automatic weapons- this backs up Source E. Though a photograph may seem to the immediate eye, more useful, this is not always the case- the sources are equally useful in different ways, each telling us something in addition to what they already confirm, but the photograph could be staged. In my conclusion Tyler is able to explore and verify what the police said, and contradict it (the police said that they were being stoned, and that the crowd was armed), whereas the photographer to show us how many people were in attendance. The sources accolade each other and provide dissimilar types of proof, making them equally valuable. ?? ?? ?? ?? Mahmoud Elsherif P.1 ...read more.