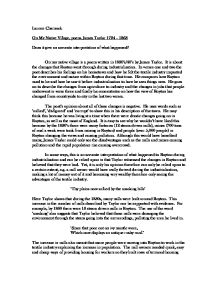 History Coursework, On my native village

Lauren Charnock On My Native Village, poem. James Taylor 1794 - 1863 Does it give an accurate interpretation of what happened? On my native village is a poem written in 1830's/40's by James Taylor. It is about the changes that Royton went through during industrialisation. In verses one and two the poet describes his feelings on his hometown and how he felt the textile industry impacted the environment and nature within Royton during that time. He compares how Royton used to be and how he saw it before industrialisation to how he sees things now. He goes on to describe the changes from agriculture to industry and the changes in jobs that people underwent in verse three and finally he concentrates on how the view of Royton has changed from countryside to city in the last two verses. The poet's opinion about all of these changes is negative. He uses words such as 'sullied', 'disfigured' and 'corrupt' to show this in his description of the town. He may think this because he was living at a time when there were drastic changes going on in Royton, as well as the most of England. ...read more.

This increase in the number of mills described by Taylor can be supported with evidence. For example, by 1860 there were 13 steam driven mills in Royton. The use of the word 'smoking' also suggests that Taylor believed that these mills were damaging the environment through the steam going into the surroundings, polluting the area he lived in. 'Since that poor cot on ivy mantle wore, Which now displays an antique rushy roof.' The increase in mills also meant that more people were moving into Royton to work in the textile industry explaining the increase in population. The mill owners needed quick, easy and cheap ways of providing housing for workers so they built rows of terraced housing throughout Royton. Taylor might have seen these newly built houses for the workers and their families and thought that they ruined the view of the rural town. The poet could see the change from beautiful, big country cottages to the small, brick houses and probably believed that they were much uglier and would spoil the look of Royton. ...read more.

me unsure of whether James Taylor's view is accurate enough to provide sufficient evidence of the changes within Royton during the 19th century. Overall, I think this poem does help me to understand what happened to Royton during industrialisation because it gives a first-hand view of a man living through the time and witnessing what happened. James Taylor gives his own personal but also quite biased opinion of what changed in Royton during his lifetime. It tells me that the growth in population and mills affected many people as well as the environment and possibly the wildlife, even though there isn't enough evidence to back this. On the other hand, the poem does not help me to understand the views of other people e.g. factory workers and owners, miners, etc. and the impact and effect on their lives rather than just that of Taylor's. I believe that their opinions would differ to that of James Taylor and possibly a more positive opinion towards industrialisation. This I believe to be the most important reason of why I think that Taylor's poem does not reflect what really happened during industrialisation and is inaccurate. ...read more.