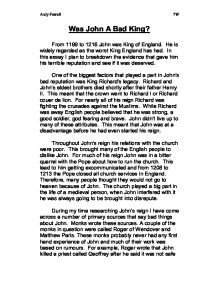 Was John a bad king? From 1199 to 1216 John was King of England. He is widely regarded as the worst King England has had.

Was John A Bad King? From 1199 to 1216 John was King of England. He is widely regarded as the worst King England has had. In this essay I plan to breakdown the evidence that gave him his terrible reputation and see if it was deserved. One of the biggest factors that played a part in John's bad reputation was King Richard's legacy. Richard and John's eldest brothers died shortly after their father Henry II. This meant that the crown went to Richard I or Richard couer de lion. For nearly all of his reign Richard was fighting the crusades against the Muslims. While Richard was away English people believed that he was strong, a good soldier, god fearing and brave. John didn't live up to many of these attributes. This meant that John was at a disadvantage before he had even started his reign. ...read more.

However, it was found that Geoffrey was still alive ten years after he was supposed to have been killed. After John was excommunicated nearly all monks hated him. Moreover, when they wrote about John they were biased. When normal people read their work they believed it as true as monks are regarded as truthful and holy. They then gave John his reputation that wasn't to be admired. When John's father married Eleanor of Aquataine Henry II owned even more land in France than he had before. John's brother was commended for his fighting skills the same was not to be said for himself. When he became King he owned almost as much land in France as in England. By 1204 John had lost much of this land including the Duchy of Normandy. This brought many people to dislike John as France was considered of great importance to England at that time. ...read more.

This was the first time an English King had some of his power taken away. Some people believed the signing of the great charter was a good thing but freemen and barons still disliked John. John was not a complete bad King, he had some good points as well. During his reign he had victories against the Welsh and the Scots. This shows he was not a complete failure at war. He also introduced a new currency and improved the money system and was tolerant of and protected the Jews, this was rare for an English King. He resided in England for nearly all of his reign, the same could not be said for Richard who was definitely an absentee King. These good things that John did were not carried through history and he is unfairly remembered for the poor things he did. In this essay I have tried to conclude if John was a bad King. Although I think he was a poor ruler, he is remembered for being worse than he actually was. ?? ?? ?? ?? Andy Powell 7W ...read more.